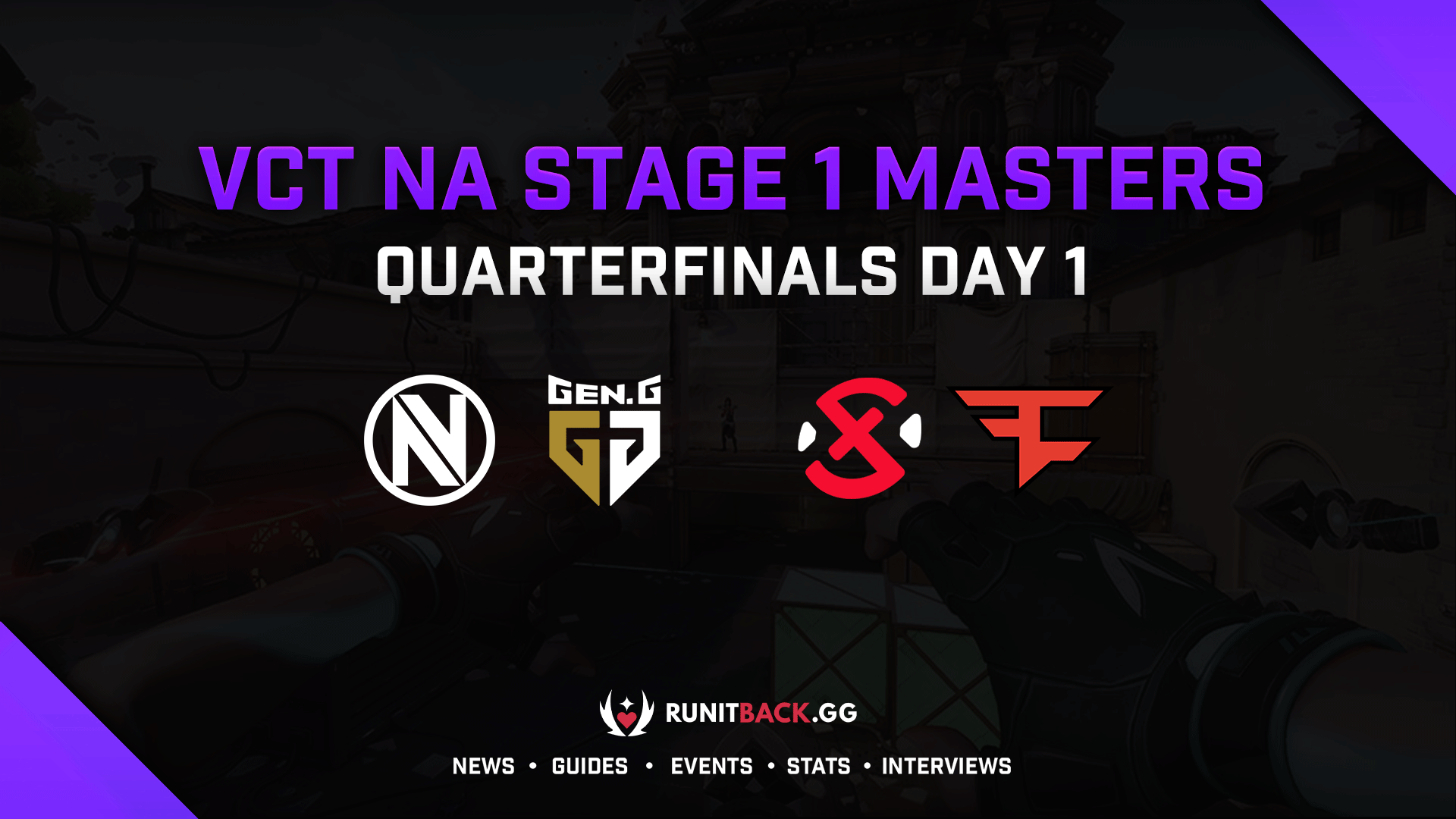 The first big step toward the Champions event is here. VCT NA Stage 1 Masters has arrived. Eight teams have taken their spot and are looking to obtain those precious Masters points during the Valorant Champions Tour. The tournament is spread across two weeks, allowing each team to showcase their talent in their match ups. The first set of quarterfinals matches has taken place with Team Envy going against Gen.G Esports and XSET battling FaZe Clan.

Read on as Run It Back recaps the first day of VCT NA Stage 1 Masters Quarterfinals.

The first round of Haven started with an incredibly quick plant by Gen.G. Team Envy failed to retake as Gen.G maintained their aggression. The second round was just as aggressive, going to Gen.G. Victor “food” Wong responded with a 3K, finally putting Envy on the board. Danny “huynh” Huynh continued pushing in with reckless abandon, creating a ton of space for his teammates. Envy were able to bring the round count much closer as Austin “crashies” Roberts started racking up the kills. Team Envy managed to prevent any further bleeding, actually bringing it back to a tied 6:6 at halftime.

The second half saw Team Envy take a play out of Gen.G’s book. The pistol round was taken by pure aggression. Another 3K by food pushed the lead further for Envy. The Team Envy attack plan just kept rolling. Gen.G struggled to defend the same aggressive nature that they showed in the first half. Jake “kaboose” McDonald joined the fragging fun as well, joining food in the offensive onslaught. Spike plant after Spike plant occurred for Team Envy, giving Gen.G no room to work with. Without a single round in the second half, Gen.G fell. Team Envy finished off Haven 13:6.

Icebox began very slow with Team Envy attacking. Once the action started, though, Gen.G was shut down in an instance giving NV the pistol round. Team Envy kept up the pressure, but Gen.G was able to stick the defuse and keep the lead from growing too large. Shawn “Shawn” O’Riley switched to Sage for this map and locked down the tube in the middle of the map. That assisted Gen.G in tying things up. An incredible play by crashies saw him snag a 4K after a Sage Ultimate revived a member of Gen.G. Gen.G were able to hold on and stop him from clutching the round, however. Anthony “gMd” Guimond played his part on defense as well, ultimately keeping Gen.G ahead.

Halftime approached with a huge 10:2 lead for Gen.G Esports. Kenneth “koosta” Suen snagged a 3K during the pistol round to bring his team even closer to a third map. Another quick round saw the Flawless banner on screen. Gen.G wiped out every Envy member for their 12th round and match point. A couple of sweet Sheriff kills by crashies kept Team Envy alive just a little longer. That bit of life remained with a food 3K. Another 3K round was had, but by huynh for Gen.G. That ended Icebox 13:5.

The first series of VCT NA Stage 1 Masters went to a surprising third map. This entire series was full of aggression. Gen.G continued that trend, pushing up B Long. Michael “MkaeL” De Luca with a 3K gave Gen.G the pistol round. Team Envy managed to take the second, however. A disgusting triple kill by food on an A Lamps push gave Envy the early lead. Another 3K by food set the tone for the first half of this map. The 3K club on Bind got another member in kaboose, keeping Gen.G on their heels. Anthony “mummAy” DiPaolo put the Operator to good use, preventing Gen.G’s initial push in several rounds. Despite all of that, some incredible plays by gMd kept the rounds tight.

Watching the map live truly made it seem like one of the teams should have entered the half with a much larger lead. That was not the case. The second half started with a 6:6 tie. Gen.G wasted no time in gaining the lead. crashies stepped up big for Envy’s first round of the half. Team Envy took that and ran with it, taking a lead of their own. Gen.G quickly tied it up, though. The back and forth matchup became intense. Team Envy took the lead back and pushed hard to series point. gMd popped off to keep pushing back, but Team Envy made sure the series was over. mummAy ended it with a knife kill, giving Envy Bind with a 13:10 round count.

The majority of Valorant spectators did not expect this match up to even take place. Regardless of that, both XSET and FaZe Clan were ready to prove they belong in the Tier 1 NA conversation. XSET started on attack with FaZe Clan on the defensive. Andrej “babybay” Francisty managed to do some damage, but XSET successfully planted the Spike on Haven’s A Site. Bryce “PureR” Lovell put the hurt to FaZe, allowing XSET to extend their lead. FaZe Clan managed to take two rounds, followed by one from XSET, and another for them. Shane “Rawkus” Flaherty popped off for a 3K, giving his team the space to take the lead. Matthew “Wedid” Suchan returned the favor with his own 3K to keep it tied. That was the theme of the first half as babybay ended it 19-8-3 with a 7:5 FaZe Clan lead.

A 4K from babybay started the second half. Shocking. That pushed FaZe Clan to a large lead. The attacking side of FaZe was an overwhelming rush of hostility. Nothing seemed capable of stopping them and the momentum they gathered. Brendan “BcJ” Jensen grabbed himself a 3K with the Sheriff as Zander “thwifo” Kim stuck the defuse and XSET stole their first round of the half. The second round went extremely close with FaZe Clan pulling it out and coming within two rounds of finishing Haven. Match point followed soon after. Naturally, babybay ends Haven with a 3K, taking it 13:6 for FaZe. He ended with a 28-12-3 score line.

FaZe Clan picked up exactly where they left off. They dominated XSET as the defensive team with Corey “corey” Nigra taking charge. Rawkus joined in on the fun, shutting down XSET completely on Bind. It was in the seventh round of the map before XSET got their first. Rawkus continued doing work, matching corey with 9 kills each. babybay knocked out a 4K with some sick Operator shots and it all but looked over for XSET and it wasn’t even halftime yet. BcJ and PureR stepped up with the latter getting three of the kills, finally giving XSET a second round. XSET managed to end the half on a good note as FaZe Clan was up 9:3.

FaZe Clan clearly wanted to end it quickly. On attack, they started with a heavy B Site rush. It worked extremely well as they planted the Spike and eliminated all of XSET. It was more of the same and the second half continued. Another B Site push saw FaZe Clan wipe out XSET one by one. Jimmy “Marved” Nguyen went wild with a 3K, taking FaZe Clan to series point in the most brutal way possible. A crazy round followed that saw a 1v1 between babybay and BcJ. The superstar of FaZe Clan prevailed, giving them the series win with a 13:3 Bind victory.

Stay tuned to Run It Back for Masters coverage as the Valorant Champions Tour continues!