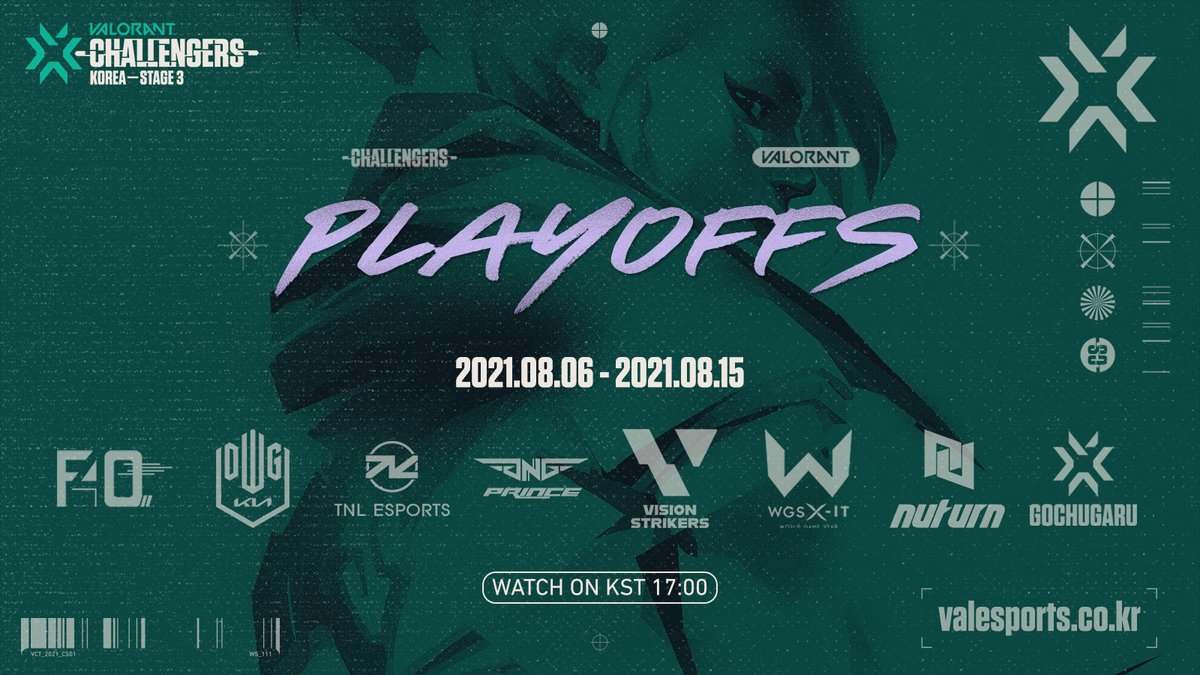 Tomorrow the quarterfinals of the playoffs of VCT Korea Stage 3 will be kicking off with GoNGo Prince facing off against Vision Strikers. The top 8 teams of the region will be fighting for a chance to represent Korea at Masters 3 in Berlin. It’s an exciting opportunity and you can bet that these teams are hungry for the chance to prove themselves on the international stage. Get ready for some exciting outplays and mind bending strats as Korea’s finest squads battle it out for VALORANT supremacy!

If you wanna read up more on the teams competing then check out our previous articles here and here.

The playoffs bracket will be as follows:

The two teams that make it to the Grand Finals will automatically qualify for Masters 3. The first and second seeds of the region will be given to the Grand Champions and Runner-Ups respectively.

And so with that short introduction out of the way, let’s dive in and take a quick look at the matchups for the round of 8!

Since the beginning, Vision Strikers have been the most dominant team in Korea. The addition of Kim “Lakia” Jong-min to the roster has given the team even more flexibility, making prep work a harrowing endeavor. Needless to say, they are the favorites coming into this quarterfinals matchup and GoNGo Prince have their work cut out for them if they even want to stand a chance at advancing into the semis. History might just end up repeating itself with GNG possibly exiting again in the round of 8 just like in Stage 2.

It’ll be one heck of an upset if Vision Strikers lose this match. They’ve shown a lot of dominance throughout the tournament and we’re expecting that level of play to continue.

This matchup should be a lot closer than the last one. TNL have looked good throughout the tournament and WGS has been very competitive as well, despite having the lower seed going into playoffs. It could honestly go either way especially since WGS is on the cusp of being considered to be tier 1. The team does have star power to draw from. Will it be enough against a cohesive TNL? The possibility is there.

We’re gonna give the edge slightly to TNL for their cleaner performance up to this point. WGS has shown some signs of struggle, especially in their last series against Unknown. With that said, it’s still a close call and we wouldn’t begrudge anyone for favoring WGS.

The stream team vs the boomer team. People might remember F4Q as the team that finally put an end to Vision Striker’s 102-0 series win streak in VCT Stage 2. With the addition of Jeong “Esperanza” Jin-cheol to the roster, F4Q has been looking like a team that can throw down with the best of the best. On the other hand, GochuGaru is a newly formed team composed of veterans in the scene that never really found success. Securing top 8 is great, but the chilli pepper team will definitely be looking to aim higher.

As amazing as it would be to see GochuGaru win the match, it’s not looking all too likely. F4Q’s fast playmaking and aggressive tactics makes them a force to be reckoned with and they look a bit too hot for even the spicy squad to handle.

Players to look out for: Chase “Bunny” Jun-hyuk and Yoo “”FiveK” Sung-min for F4Q  Kim “Chibab” Young-hyun and Kim “NakJi” Sang-hyeop for GochuGaru.

The last quarterfinal matchup is gonna be a banger of a match. These two teams have been the top dogs in Korean VALORANT along with Vision Strikers for a long time now. Honestly, it’s a bit of a shame that the matchup is happening so early in the playoffs. Still, it doesn’t take away the excitement we’re feeling. Both teams are gunning for that trip to Berlin. Any less than that would be considered a failure, especially for NUTURN who had managed to claim third place in Masters 2 against all expectations. They want to take it all.

Meanwhile DAMWON Kia, despite being highly regarded, has yet to take home a major trophy. They’ve suffered through being the bridesmaid instead of the bride time and time again. In Stage 2, they narrowly missed out on the opportunity to go Iceland by losing to NUTURN in the grand finals. Now is their chance for revenge and glory.

Despite their roster shake up after their run in Iceland, NUTURN still look as strong as ever. Meanwhile, DAMWON Kia showed many signs of struggle in the group stages. The biggest factor in this series will definitely be Kim “t3xture” Na-ra. The man has shown the ability to take over a map if given the right opportunity. However, if there’s any team in Korea that can contain a star and not tilt when things are going wrong it’s NUTURN. Either way, this is going to be one exciting series.