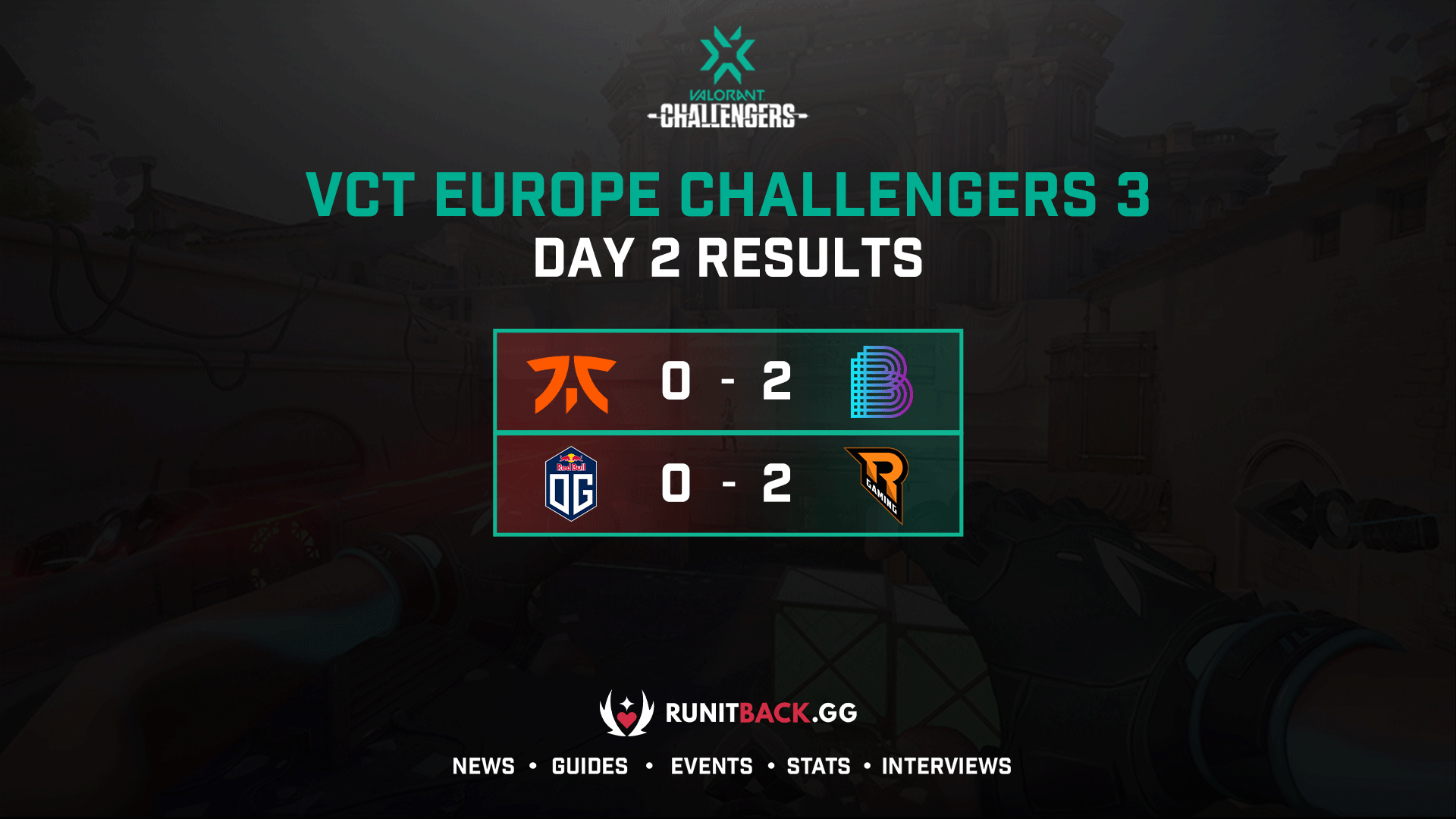 After an exciting day one of Valorant Champions Tour (VCT) Europe Challengers 3, day two saw even more intense Valorant action. With that, came some upsets and surprises that many fans did not come to expect. Day two of the last Challengers event before Masters 1 saw Fnatic face Ballista Esports followed by OG versus Raise Your Edge Gaming.

There was no doubt about who the favorite was going into this matchup. Fnatic was eyeing the next spot at the upcoming Masters event and it seemed like they may have gotten the easiest matchup possible. Ballista Esports, a relatively unknown Polish squad on the Valorant scene, was standing in Fnatic’s way. It’s fair to say that the Polish squad made Fnatic’s day living hell.

Action kicked off on Haven, map pick of Ballista. An extremely back-and-forth half led to a split of 6:6 in points. Phenomenal retakes from Ballista on their defensive side paired with relentless fragging power from Kamil “baddyG” Graniczka on Phoenix saw great potential in the underdogs going forward. On attacking side, the Ballista squadron popped off to take the first four rounds through utilizing simple explosive tactics to gain ground on Haven. Fnatic tried to push back, but in the end only managed to garner two rounds before getting blown out in the second half. Ballista Esports took their map pick at 13:8.

Next up was Bind, home ground of Fnatic, where James “Mistic” Orfila shines by using his insane Viper lineups. Kicking things off on defense, Fnatic took the three first rounds. Ballista managed to take one back, before Fnatic took two of their own. A trade match of two-by-two points gradually emerged, leading to Fnatic taking the lead at the half at 7:5. On defense, Ballista boys looked stellar. The Polish side took the first two rounds shortly before Fnatic had enough and took three of their own. Mistic’s plays combined with classic Domagoj “doma” Fancev’s sheer aim led the way as things started to heat up. However, Ballista would retaliate over and over, taking us to overtime. There a 4k from baddyG guaranteed the first round before a blowout round of defensive display from Ballista squad.

The Polish Ballista side overcame Fnatic in the huge upset to get into VCT Masters 1 out of Challengers 3.

OG vs Raise Your Edge Gaming

The second matchup of the day brought us OG against RYE. The final match of Challengers 3 would reveal the last team to attend the European VCT Masters 1 event.

The first map took us to Ascent, pick of RYE. Raise Your Edge got to work quickly, racking up points on attack utilizing great entry fragging in their favor. OG looked helpless on defense, managing to only scrape three rounds after successful site retakes that led to Spike defuses. The half went in favor of RYE with a hefty lead of 9:3. There’s not much to say about the defensive side of RYE on Ascent. The four rounds that they needed to close out the match happened in the first four rounds. Two retakes and two wins by elmination led to a 13:3 blowout in favor of RYE on their map pick. Vladyslav “kiles” Shvets shined on Reyna for his side to boost his team for the win.

Bind was up, and it was time for OG to turn up the heat in their favor. Map two kicked off in rather weird fashion. Expectations were high for OG to put things in fifth gear,, but it was RYE that went in with the momentum by getting seven rounds in a row before OG finally pulled one back. The half went in favor of RYE at 9:3 as OG was in big trouble. Benjamin “uNKOE” Chevasson’s side started to get to work on their defensive side by getting the pistol and the subsequent round following a 4k from the team’s Omen, uNKOE. The two teams traded blows for the next two rounds before we saw RYE pick up steam once more. A 3k from Patryk “starxo” Kopczyński propelled his side to clinching the final three rounds to steal OG’s map pick and end the series at a clean 2-0 in maps at a 13:6 scoreline on Bind.

Raise Your Edge Gaming qualify for VCT Europe Masters 1. OG will unfortunately miss out on the event.