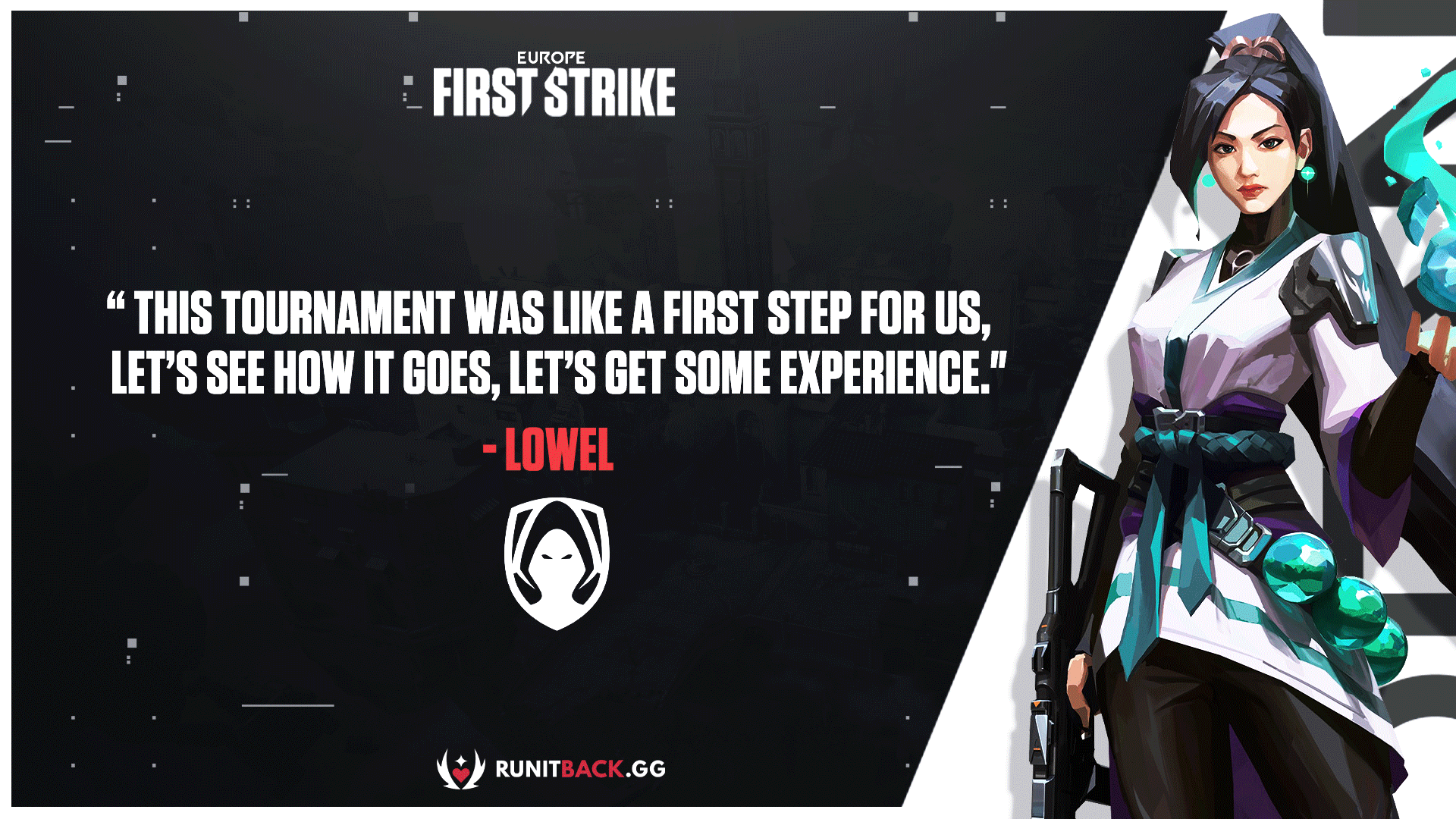 We were lucky enough to catch Christian “loWel” Garcia Antoran after Team Heretics’ massive win against G2 Esports to make them the first finalist of First Strike Europe Regional Finals. loWel was kind enough to tell us his side’s mindset coming into First Strike, his thoughts on how Liquid played, him sticking to Sage, and much more.

RunItBack: So, you must be ecstatic after the win you just pulled against G2!

RunItBack: Thank you for taking the time to talk with me today, I know that you’re really tired because that was one hell of a game. That game was possibly the best one we’ve seen perhaps in all of First Strike.

loWel: Yeah, I think it was amazing for the spectators to see this match.

RunItBack: So, you’ve managed to beat arguably the best team in Europe, just after beating Team Liquid on Thursday. How are you feeling after this huge achievement of besting two of the best teams on the European Valorant scene?

RunItBack: Since you’re the first finalist, who would you rather face tomorrow, SUMN FC or FunPlus Phoenix?

loWel: I would rather face FPX, because I have really good friends there, especially ANGE1. We played together before in HR [HellRaisers], we played Majors together and tournaments. He’s a really good friend of mine. For me, he’s a really good player in every aspect and a really good person. So I would like to face them, only because of that. And also because FPX is a really good team, and I think FPX is better than SUMN. So, we beat Liquid, we beat G2, and now we need to beat FPX. If we lose, it’s okay. But primarily, this tournament is just to improve the team for the future.

RunItBack: So, tomorrow, probably FPX. Do you think between FPX and SUMN, SUMN put up a good fight against Purple Cobras, but it was Purple Cobras, not G2 or Team Liquid. How do you rate the chances of SUMN qualifying for the final against you tomorrow?

loWel: To be honest, this game is going to be really close between FPX and SUMN because I didn’t watch SUMN really much before, but I watched their game against Purple Cobras. And, I have to say, they were playing really well. They had a gameplan for everything, like with Viper on Bind. But I think, in general, I’d say FPX has more of a chance to win. But everything can happen.

RunItBack: Going back to the match against Team Liquid on Thursday. It seemed like Liquid were getting carried by ScreaM on every map that you faced them on. Did you expect this, and did you have a plan in place to contain ScreaM when he went off?

loWel: I’m going to be honest with you, I expected this from ScreaM, because I know how good he is and he is capable of doing those kinds of things in those kinds of games. But, as I said before, we had no experience in those types of tournaments, and we didn’t have a gameplan for them. Our playstyle nowadays is trying to adapt to the enemy team. I’m trying to call, trying to think what they are doing, and what is the best possibility on how to win the round. But I want to say something. Even though ScreaM played insanely good, he was in beast mode on Thursday, I think the team in general, Liquid, were playing really well together. If you see the match again, ec1s was flashing all the time for him, for example, with really good timings and stuff like that.

RunItBack: You’re one of the few players that still likes to stick to Sage. So, Sage has become a relatively rarely used agent on the pro scene, maybe still used on a few maps, but I’d like to know your reasons for sticking to Sage on such a high level.

loWel: Personally, I like Sage a lot because she’s an agent that gives you the choice between playing aggressive and playing safe according to the utilities that you have. So depending on the situation, you can play slow with your slows and your wall, I think if you have good timings, you can win the round. But the main reason why I’m playing Sage is because nowadays I think like 80% of the teams are playing Breach. Because Breach is really important nowadays I think with the flashes, they’re really OP (overpowered). And I think with Sage, if you have really good timings, you can counter the executes.

Like for example, let’s take Haven. I’m playing A and they want to execute Long. Some teams that are executing A will use the Breach Ulti, flashes, stuff like that. So, with Sage, if you have really good timings you can just put the wall or slow, and counter everything. And they can’t do anything. So nowadays with the meta with Breach, I think Sage is a good agent to counter them. But you need to have good timings. For us it’s working. We beat Liquid and G2. I’m feeling good with it [playing Sage].

RunItBack: As we know, you are the captain of your team. Are you actually calling the shots all the time, or does someone else sometimes take over when calling strats. Or is it mostly up to you to do that job?

loWel: Mostly it’s me. But everyone is trying to help. But right now what we are trying to improve is that kind of experience. Nowadays I’m calling like 85% of the time, as defenders and attackers. But it’s not because my teammates are not good at that, like I said before only nukkye and me had a lot of experience before and we’re used to playing these kinds of games so we know how to manage the pressure and those things. So the most important thing for the team, especially niesoW, pAura, and AvovA, they need to improve in these kinds of calls under pressure. But, yeah, right now mostly I’m doing the calls, but it’s also true that everyone is helping me so much. Like for example today against G2, pAura was also doing some calls, nukkye was doing some calls. So I’m really happy with them.

But as I said at the beginning, this tournament was like a first step for us, let’s see how it goes, let’s get some experience, we know that we can beat every team skill-wise. We have a very high skill ceiling. But we lack some experience like G2. G2 has five players coming from CSGO, and they are used to playing in some situations with communication, like I’m peeking this, let’s do this, you can refrag me. So in my team right now we are missing a bit of that, but because we need to improve on that. But anyways, even without those basics we managed to beat G2 and Liquid. So it feels amazing, because even without those basics we can beat anyone.

RunItBack: That’s great to hear and see. So, loWel, tomorrow we might be seeing your side crowned us the champions. On behalf of RunItBack, I wish you all the best tomorrow and in your future endeavours in Valorant!