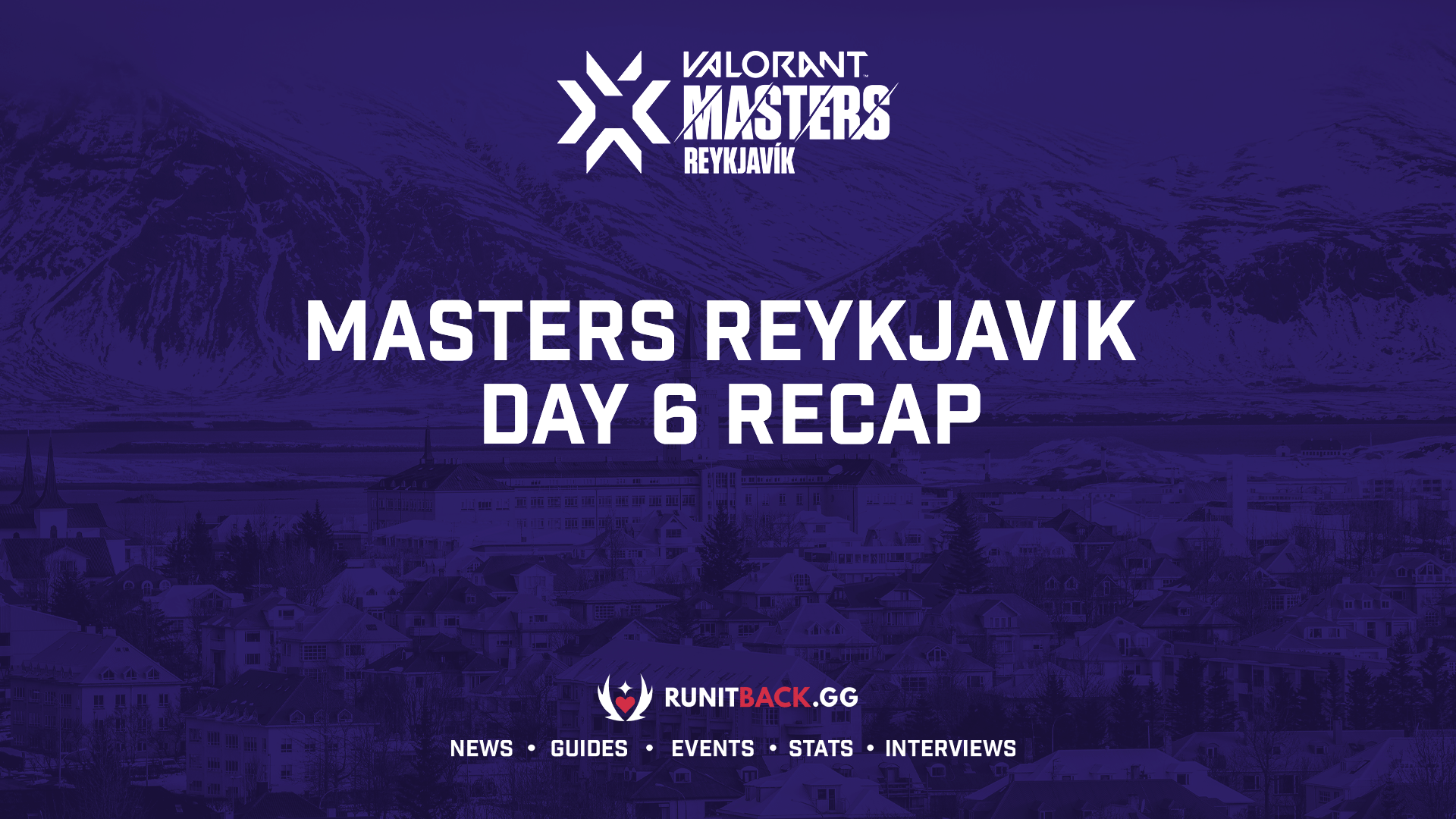 No one has been able to stop Sentinels up to this point during Masters Reykjavik. Now, there is one last chance for the NA kings to be dethroned at the global level. With a spot secured in the Grand Final of Valorant’s first international LAN, another team must join them. It comes down to FNATIC, Team Liquid, or NUTURN Gaming. Lower Round 4 kicked off Day 6 of Masters Reykjavik with a rematch of the EMEA Grand Final. The winner of FNATIC vs. Team Liquid then went on to face Korea’s finest, NUTURN. That Lower Final contest decided who would meet Sentinels in the Grand Final.

Read along as Run It Back recaps the Lower Round 4 and Lower Final of Masters Reykjavik as the event inches closer to its conclusion.

The first map of the series was fought on Bind. It started with FNATIC taking charge as the attackers. Team Liquid got some weapons in their hands to take the third round, however. Domagoj “Doma” Fancev brought out the Raze, racking up kill after kill to keep his team ahead. It took some time for Team Liquid to get going, but they eventually managed to put another on the board. That was followed by yet another as Dom “soulcas” Sulcas got in the zone with Skye. The same happened with Travis “L1NK” Mendoza, picking up three kills to keep TL’s momentum. Bind reached halftime with a 7:5 lead for FNATIC.

Team Liquid dominated the first two rounds of the second half, tying the map. With weapons in hand, FNATIC were able to execute on defense, not just to retake A site, but to retake the lead. They continued to shut down TL, making their way into double digit rounds. Jake “Boaster” Howlett made use of every tool he had, from his Ultimate to his weapon, to pressure TL. TL tried to fight back, but FNATIC made it to the finish line. Bind ended at 13:10 for FNATIC.

FNATIC started Ascent on attack, as well. Things went a bit differently than they did on Bind. FNATIC took the pistol round and managed to come out of the first gun round with a victory. The next was a Flawless for Team Liquid, though, as L1NK and Elias “Jamppi” Olkkonen cleaned house on A site. Three from Adil “ScreaM” Benrlitom gave TL another. Four more from the one tap king tied the map. FNATIC and Team Liquid battled back and forth, ending the first half 7:5 in TL’s favor.

TL took the first round after halftime as ScreaM sat with a K/D of 19-8. FNATIC incredibly took the next round, keeping themselves close. A 3k from Martin “Magnum” Peňkov contributed to a Flawless round and FNATIC continued to close the gap. They kept up the onslaught, taking the lead at 10:9. Nikita “Derke” Sirmitev and his trusty Operator did some incredible things for his team. As well, L1NK and his Judge clutched a 1v3 to finish a 4k. Four from Magnum pushed FNATIC back in front. Team Liquid could not come back from that as FNATIC ended Ascent 13:10.

The first series between EMEA and KR began on Bind, a favorite of FNATIC. An insanely close pistol round saw Jung “peri” Bum-gi stick a defuse and and surprise FNATIC. FNATIC then forced a buy to take the second round. A huge 3K by Doma kept FNATIC in front. Three from Seo “Suggest” Jae-young looked to keep NUTURN Gaming from falling too far behind. They managed to put together a handful of rounds, but Bind is FNATIC’s playground. Halftime approached with the EMEA squad ahead 8:4.

The second half kicked off with NUTURN taking the pistol round. That gave them the momentum they needed. In the blink of an eye, NUTURN tied things up with FNATIC 8:8. FNATIC immediately pushed back after the tie. The slow pace of NUTURN allowed FNATIC to hold their ground on defense, pushing into double digits. Match point came quickly after. A massive Clutch from Boaster saw him jump through the TP and take out two NUTURN players set up for a crossfire. That ended Bind 13:8.

Ascent was the second map of the series. FNATIC started off strong as the defending team, but a crazy second round saw NUTURN stop a defusal with very little time left. NUTURN and their post-plant setups successfully kept them in the lead. James “Mistic” Orfila took down three, but Kim “Lakia” Jong-min stopped him with a Shock Dart to keep NUTURN on the up and up. Derke took three to finally get FNATIC another round. Mistic pulled out an Odin and sprayed into B Main to deal some serious damage. That only helped them to an 8:4 deficit, however.

Both Suggest and Park “allow” Sang-wook took out three in round one and two respectively after halftime. That got NUTURN to double digits. Four massive kills came in from Derke, but he was shut down before the Ace as NUTURN looked to take things to map three. FNATIC showed that they had a few more tricks up their sleeve. Derke kept destroying NUTURN every time he had access to Blade Storm. It wasn’t enough, however. NUTURN forced a trip to Haven 13:8.

Haven started with Lakia shutting down FNATIC’s attack on A site with a 4K. He continued with two more in the next round, putting NUTURN up in the pistol rounds. FNATIC took their first one after getting some better weapons. That kept them in it with NUTURN as the rounds would eventually trade. Lakia kept up the domination on Sova, but FNATIC were able to keep things close and eventually pull ahead. Halftime approached 8:4.

The first round of half two saw FNATIC’s lead grow. As the defending team, they reached 10 rounds with relative ease on the back of a 3K by Mistic. Haven has just not been kind to NUTURN during this tournament. It would ultimately be their demise, sending them home from Iceland. The team from Korea managed to take four rounds late in the game, but FNATIC proved too much to handle. Moving onto the Grand Final against Sentinels is FNATIC after beating NUTURN Gaming 13:8.

Stay tuned to Run It Back for coverage of the Masters Reykjavik Grand Final and the remainder of the Valorant Champions Tour!