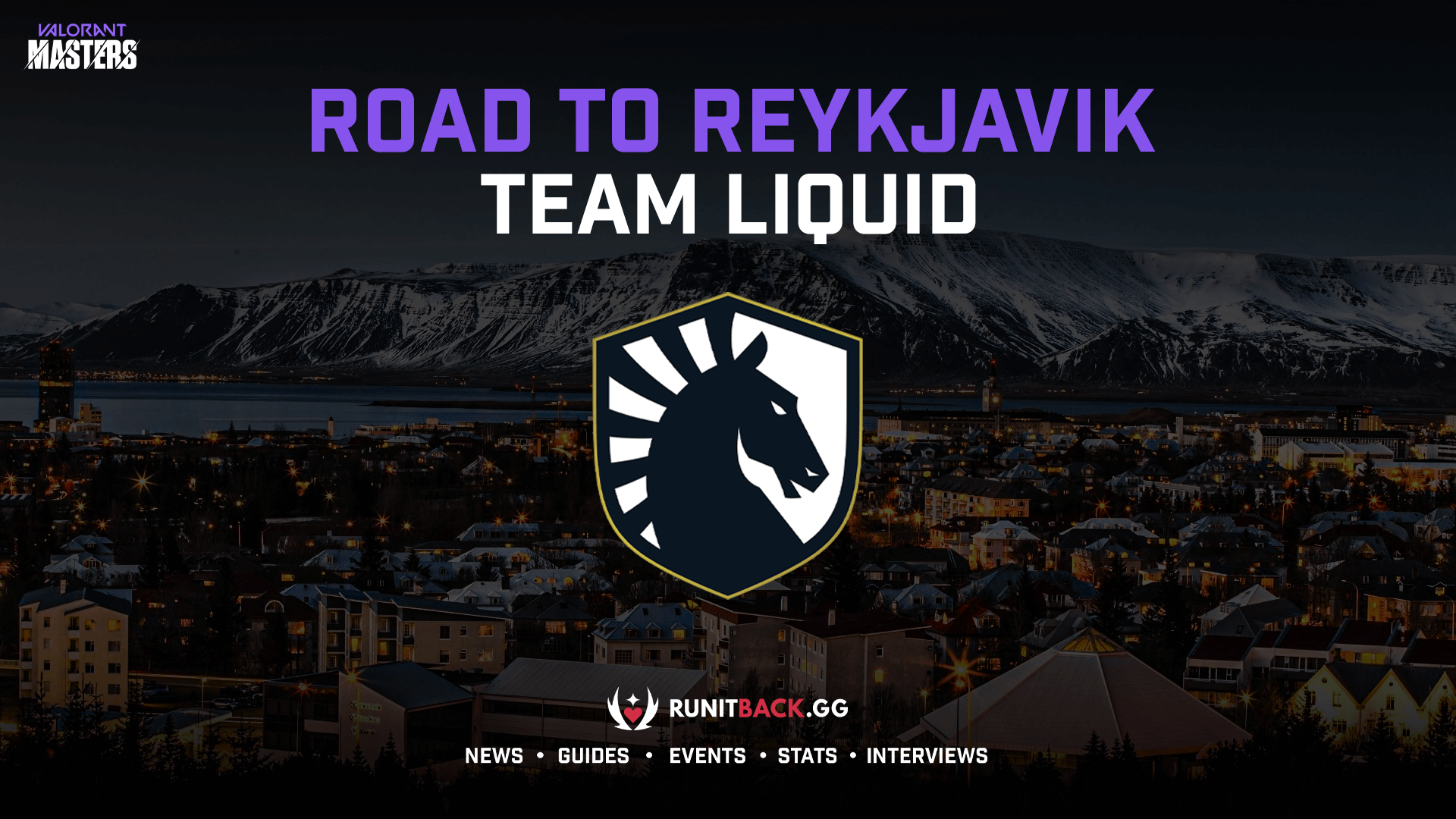 Welcome to Run It Back’s Road to Masters Reykjavik series where we look back on each participating team’s story of how they entered the first international Valorant LAN event. Since the teams are being released in order of qualification, today we’ll be focusing on Adil “ScreaM” Benrlitom’s Team Liquid side.

Team Liquid’s less than desirable performance at VCT Stage 1: Challengers series was a tough pill to swallow. After qualifying for the Challengers 1 Main Event, FunPlus Phoenix were quick to deal with Liquid. The defeated Liquid side had to go again in Challengers 2. There, Alliance were better on the trigger at Round of 16 of the event, cutting ScreaM and co.’s run short.

This poor start to the race for an entry to Stage 1: Masters called for immediate changes. Soon after their defeat at Challengers 2, Liquid made a significant change to the roster. Adam “ec1s” Eccles, the team’s in-game leader, was benched. On February 25, just a day after Liquid benched their igl, an unexpected player joined Liquid. That man was the CS:GO prodigy, Elias “Jamppi” Olkkonen.

Known for his aggressive style of AWPing, Jamppi was a star player on the CS:GO scene. However, he was issued a ban from Valve-sponsored events due to having received a VAC ban in 2015. This dawned on the player as he never could truly shine on the elite stages of CS:GO. Interestingly enough, Valve’s “New RMR Eligibility Guidelines” issued on April 15, have resulted in Jamppi becoming ultimately unbanned. This was not long after he joined Team Liquid’s Valorant team.

We got to ask Jamppi whether he was thinking of going back to Counter-Strike following him being unbanned.

I haven’t really thought of it. I was just really happy when I got the news. I’m just not going to think about the future that much. I’m just going to keep playing this Valorant game and hopefully we qualify to Iceland (Masters 2). I cannot predict the future, whether I’ll be playing Valorant or CS. Right now my focus is fully on Iceland (Masters 2) and winning that tournament.

After acquiring the young Finn, Liquid still had one final chance to get into the Stage 1: Masters event, and that was Challengers 3. There, another defeat came prematurely, this time by being bested by Rix.GG. This meant that Team Liquid were out of the fight for Masters 1 even after making the adjustment to the roster.

After a more than disappointing run at VCT Stage 1, Liquid returned to this time make it to the Masters Reykjavik event. Though full of hunger, the European team did not by any means have a smooth ride to the EMEA Regional Finals.

ScreaM‘s side kicked things off at Challengers 1 where without much problems, the team saw an entry into Round of 16, following a Round of 32 victory against SAW. There Guild Esports awaited, as victory guaranteed entry into the Main Event. Team Liquid were beaten on Haven with a close 13:11. Bind did not go their way either, as Guild reigned supreme with a 13:8 score, knocking Liquid out of contention for EMEA Regional Finals from Challengers 1.

This upset did not ruin Liquid’s plans to reach the EMEA stage of competition. Challengers 2 was the team’s final hope as this time around, there was no third chance in the form of Challengers 3 like at Stage 1 of the competition.

Team Liquid returned with a clear mind and with much more edge to Challengers 2. Round of 32 went smoothly as Jamppi and co. dealt with Entropiq. Round of 16 brought Alliance to the table — and with it the perfect opportunity for revenge for Stage 1: Challengers 2. Though the best-of-three saw only two maps being played, the 2-0 sweep for Liquid was a tight one. Nevertheless, Liquid at that point qualified to the Main Event.

Then, Round of 8 ensued, where they faced one of the favorites, Kevin “akukhoS” Droolans’ (formerly known as Ex6TenZ) NIP. Despite it being a match for seeding, Team Liquid emerged victorious once more to receive the better seed at the Main Event of Challengers 2.

The better seed at Challengers 2 paid off massively for Liquid as they were pitted against CE Calling in the quarterfinals, the biggest underdog entry in the stage of play. The experienced Liquid side battered the German side 13:1 on Bind. Ascent, the following map, saw CE Calling put up a better fight, yet it was Liquid who took it home at 13:8. Job done as it was semifinals time and things got serious.

Team BDS would be the most important match Liquid would have to date at this VCT: Stage 2 event. The winner would get to advance to the EMEA Regional Finals to represent Europe alongside Fnatic, FunPlus Phoenix and Guild Esports in the fight for the entry to Masters Reykjavik.

The BO3 would go all the way as the former DfuseTeam roster took Haven with a marginal score of 13:11. Bind would follow and a very tight game emerged. After initially trailing, Liquid mounted on a last-second comeback to make it 12-11, though BDS made it all square following a phenomenal 1v3 clutch by BDS’ Alex “AKUMAAAAA” Lo Bello to force overtime. After round trades in the first overtime, Liquid finally managed to force the decider map, Ascent, after a 15:13 result on Bind.

There, we finally saw the true colors of Liquid, especially on attack following a 10:2 lead in the half. BDS began their comeback journey by putting together four rounds straight on their own attacking side. This effort was brushed off by Liquid after they stringed three rounds to close it out at 13:6. Jamppi shined on Bind and Ascent to boost Liquid right into the EMEA Regional Finals.

Yet that was not all. By winning the semifinal, Liquid entered the final of Challengers 2 where they would face Fnatic. Though it was a match purely for seeding and bigger share of the prize pool, it was more about showing who is the better side. The best-of-five affair saw Fnatic come out on top with a 3-1 scoreline in maps. This left a bittersweet feeling for Liquid, even though they were through to the EMEA Regional Finals.

After a tough journey at Stage 2 Challengers, Liquid made it to the more international online stage that was the EMEA Regional FInals. The event saw 4 European, 3 Turkish, and 1 CIS teams take part. With only two tickets to Masters Reykjavik, the stakes were the highest up until now in Valorant.

Liquid were put into group A consisting of Gambit, FPX, BBL, and of course Team Liquid. Liquid’s opening matchup was against BBL Esports, one of the three Turkish squads at the event. Despite an initial loss on Haven, Liquid took the next two maps — Ascent and Bind — to make their Opening Match a triumph. From there they moved on to the Winners’ Match.

Kirill “ANGE1” Karasiow’s FPX was the next team they had to overcome in order to reach the semifinals. Not many knew what to expect as Liquid were on a roll, while FPX was deemed to be one of Europe’s finest tactical teams. Yet, it was Liquid’s unmatched firepower and strategy that saw Team Liquid demolish FPX with a clean 2-0 scoreline. Though the whole team performed up to standard and beyond, one man stood out, and naturally, that man was ScreaM. After both maps saw him top fragging, he also received the MVP award for his efforts against FPX.

After the defeat of FPX, Team Liquid entered the semifinals, where they would face a second Turkish team. This time around it was Oxygen Esports. Nobody could expect the decimation that was to unravel at this matchup. What ensued was hard to believe. Oxygen only managed to put up three rounds in the BO3 over two maps. A total blowout on Haven with a 13:0 score propelled ScreaM’s side to continue the plowing, this time on Ascent. Instead of a 13:0 sweep, Liquid beat Oxygen with a not-so-much better score for Oxygen at 13:3. The unheard of performance by Liquid granted them the very first ticket to Masters Reykjavik from the EMEA Regional Finals.

“It feels amazing. It’s been a long road so far. A lot of games to win. A lot of games to prepare for,” said ScreaM, “we also changed a lot of things in our game so qualifying means a lot for us. The fact that we made it happen is a super nice feeling, even though it’s not finished, it’s only the beginning. Honestly, I knew we had the potential to do it. We showed a really good face so I’m really happy over the last few weeks.” (check out our full interview with Liquid’s headshot machine).

However, Team Liquid’s winning ways did not end there. Fnatic had received the second ticket to Masters Reykjavik. This meant that the two would meet once more at the final of EMEA Regional Finals. Though both teams were happy to have qualified for the Masters event, Liquid had unfinished business with Fnatic after their defeat at the final of Challengers 2.

Final Battle and the MVP

The BO5 finale against Fnatic went all the way to the fifth map. An intense back-and-forth affair saw both teams out-edge one another map after map. On the very last map, Split, Team Liquid finally closed it all out. A near-perfect attack side led to Liquid getting the upper hand at half time; at 9:3. Fnatic managed to get within reach of a comeback after bagging four straight rounds on attack. Liquid cut Jake “Boaster” Howlett’s side short by retaliating with four straight rounds of their own to close out the series that went to the wire.

ScreaM received the MVP award for the final against Fnatic. Not only that, the Belgian also received the MVP for the whole EMEA Regional FInals event. His consistency was unmatched. And though Team Liquid is by far not just a one-man team, ScreaM steps up on a regular basis to give his teammates that extra boost through often unbelievable plays.