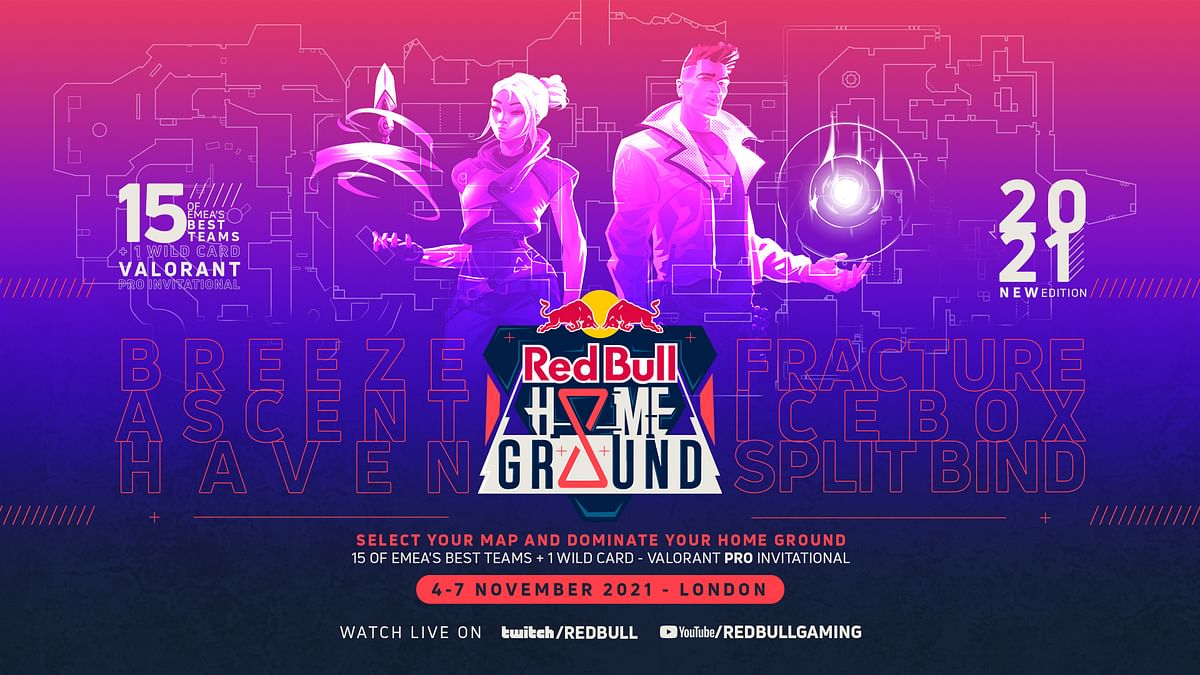 Red Bull Home Ground 2 playoffs are upon us. After a heated group stage riddled with best-of-one upsets, we’ve finally witnessed the true Red Bull Home Ground system experience. 8 teams joined the fight from their respective groups to determine the quarterfinals. Day 1 of the main event saw the following teams clash:

The most hyped match of the quarterfinals was Team Liquid vs Fnatic; often named the “El Clasico” of European VALORANT. However, the other matchups were just as competitive and brought A-tier VALORANT to the spectators. Have a look how the matches went on Day 1 of Red Bull Home Ground’s main event.

Note: Red Bull Home Ground utilizes a different BO5 format. Each team picks their “home ground”, meaning first map to be played. Home Grounds are played first and if one side wins both home grounds, they automatically win the BO5. If not, the BO5 continues as usual.

Adil “ScreaM” Benrlitom‘s side swiftly closed off their home ground, Split. Liquid’s attacking half was stellar, with the star, ScreaM popping off on Reyna throughout. His teammates also shined, with Nabil “Nivera” Benrlitom perfectly using his Viper utility to outplay Fnatic’s defense. Fnatic struggled to repent the attackers, with Jake “Boaster” Howlett and Nikita “Derke” Sirmitev failing to keep up with the tempo, leading to a 8:4 lead for Liquid at the half.

The second half saw more of the same from ScreaM on Reyna. A 3k on the pistol was followed up with a 2k on the follow-up, putting Liquid up 10:4. Fnatic got to work on attack soon afterwards, as they managed to snag two rounds after Spike plants. That was it for Boaster‘s men, as Liquid sailed home from there, ending the fight on Split 13:6.

Fnatic had to win their home ground to stay alive in the series. Liquid, however, kicked off on the right foot by bagging the first three rounds of the half on defense. Fortunately, Fnatic woke up to finally take the lead. A 3k 1v1 by James “Mistic” Orfila hyped up the Fnatic side as they looked much better on Icebox. Still, Liquid were formidable on defense, squaring off the half at 6 points a side.

Unfortunately for Fnatic, ScreaM was having a hell of a day. This time on Jett, the Belgian was an absolute menace on attack. Liquid put together five straight rounds to give themselves plenty of room to work with. Fnatic attempted to make a comeback after stellar efforts from Derke, but that simply was not enough to challenge the formidable Liquid side. Eventually, Liquid closed off the affair on Icebox at 13:8. And with that, the series at 2-0 after taking both home grounds.

Action kicked off on Bind and right off the bat TENSTAR got off to a hot start on defense. Led primarily by Niko “Polvi” Polvinen and Tremaine “stanley” Stanley, Bind’s defense looked impenetrable at first. Finally, LDN UTD made a breakthrough on round 7 a combined team effort got them the first round on attack. The predominantly Lithuanian squad chained together 4 straight rounds to keep the dub within reach. The last two rounds, however, belonged to TENSTAR, as they closed out the half at 8:4 in their favor.

TENSTAR rode the wave of victory into their attack side. A 2k 1v1 clutch by stanley gave them the pistol, before the British side took three more rounds on top of that right away. Then at map point, LDN UTD made a last-ditch effort to put together a comeback on their own home ground. Solid plays from feqew on Jett, and then a combined ace from Michał “MOLSI” Łącki and Aurimas “Dreamas” Zablockis, gave LDN UTD two rounds. That would be all she wrote as TENSTAR’s polvi stole the show with a 3k 1v2 clutch to finish off the map at 13:6.

After stealing their home ground, it was TENSTAR’s opportunity to finish off the series. Split was their own home ground pick, yet LDN UTD came up big to turn things around.

The first half of Split ended up being a very close affair as neither side was willing to let the other get too far away with the map score. One man, however, stood out from the crowd. LDN UTD’s Jett player, feqew was treating Split as his playground. With a 6:6 half, feqew was already on 19 kills. Polvi and Russ held down the fort on attack, as they managed to get 12 kills each.

The second half saw TENSTAR get ahead to 10:6 after big plays from Calum “KRAY” Knight and the team overall. A 1v1 victory by Destrian, gave LDN UTD their first point on attack, but TENSTAR punched back with two more, putting them at match point. It was at that moment that LDN UTD got to work fast to make up ground with four straight rounds. At a 11:12 deficit, Polvi‘s opening kill and Br0die‘s 2k was enough for TENSTAR to bag the map and series before things went to overtime, at 13:11.

Bind went all sorts of wrong for Futbolist as Giants established absolute dominance on their home ground. A combined ace from Adolfo “Fit1nho” Gallego alongside Aaro “hoody” Peltokangas, foreshadowed what’s to come into the map. Giants kept menacing Futbolist’s defense all-map long. The Turkish side managed to get round 5 after Konur “qw1” Alp Şahin’s 3k. Giants brushed that off quickly as they continued rolling on attack until the very end…winning every round. Everything was going their way as Hoody and F1tinho ended up with 17 frags each at the end of the half. Futbolist had to make up an 11:1 deficit.

The second half left a lot to be desired for Futbolist as they failed to breakthrough to sites. This led to Giants taking a crushing 13:1 win on Bind.

With their backs against the wall, it was time for Futbolist to turn things around on Icebox.

This, however, did not happen. A 4k 1v1 clutch defuse by David “davidp” Prins on the first round, showed us a glimpse of what was to come. Giants pressed the already bleeding Futbolist team to the wall by getting 5 defuses to win the round on their defense side. Fit1nho was also having a ball on Icebox as Jett, getting 17 kills. The Turkish side only managed to get two rounds in the half to make it 10:2.

The second half did not go any better for the losing side. Forceful site takes by Giants saw them get the three rounds necessary to win in a row. Once more, Fit1nho absolutely shined when it comes to taking duels and winning them. Vodafone Giants defeated Futbolist in stellar fashion on Icebox 13:2.

Split between these two sides emerged as the most intense matchup of the day. The first half of Split was a set of rounds trade-off as neither wanted the other to run away with the lead. Acend kicked off on defense by taking the first two rounds. Gambit went right back with three rounds of their own as Bogdan “sheydos” Naumov got a nice 4k at the end of the streak. Mehmet “cNed” Yağız İpek came back angry to lead his team to take the next three in return. However, Gambit recomposed to take the last four rounds of the half for themselves to get a slight lead in the half at 7:5.

The second half was just as intense as the first. Acend kicked things off to square off the points on Split at 7:7. From then on, we saw a battle between cNed and the duo of Timofey “Chronicle” Khromov and Nikita “d3ffo” Sudakov kick off. Neither team could chain more than two rounds together, finally bringing us the first overtime of the Red Bull Home Ground 2 main event.

There, cNed continued to be the hero for his side, getting a 3k twice, to guarantee Acend the victory on their opponent’s home ground at 15:13.

Nobody expected Gambit Esports, the champions of Masters Berlin to get 13:0‘d. But Acend did it. This time around, Patryk “Starxo” Kopczyński and Vlad “kiles” Shvets paved way to smooth victory. Gambit just could not find their footing on defense, with only two kills coming from the team as a whole in the entire match.

A 12:0 half was paired with a combined 4k from cNed and Starxo on the pistol round of their defense side. That led to a highly unexpected 13:0 blowout on Bind.