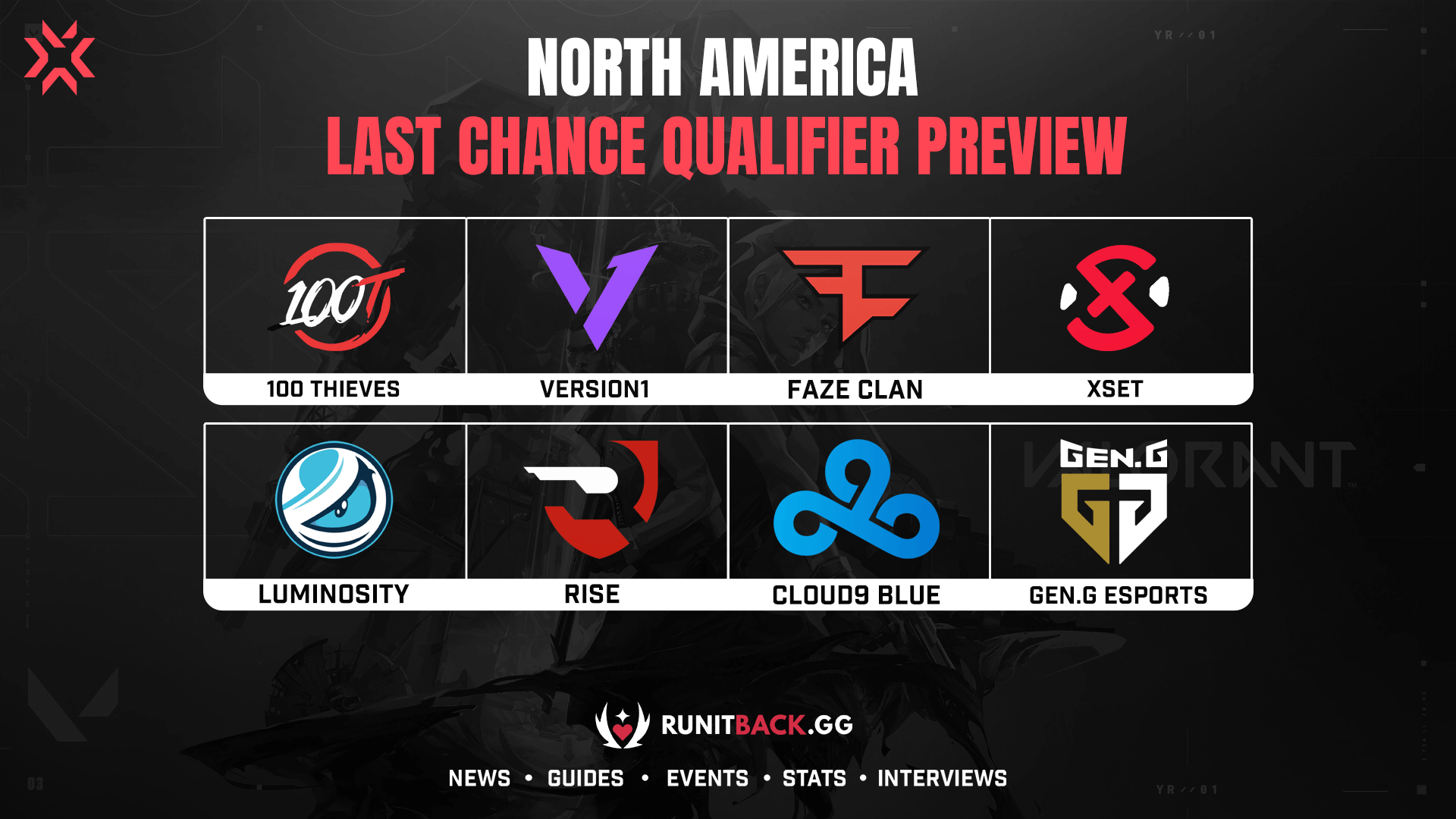 It is hard to argue against the North American and EMEA regions being the top tier of global VALORANT. Both international LAN tournaments saw amazing performances by NA teams with the most recent being won by an EMEA squad from CIS. That means all eyes will be on the North America Last Chance Qualifier to see who will give NA a chance to reclaim worldwide VALORANT supremacy.

The following eight teams will fight for a Champions spot:

The North America Last Chance Qualifier runs from October 12, 2021 through October 17, 2021. As you can see, the opening contests are 100 Thieves vs. Gen.G Esports, XSET vs. Luminosity Gaming, FaZe Clan vs. Rise, and Version1 vs. Cloud9 Blue.

This one is a doozy. The NA LCQ was originally scheduled to be a 10-team tournament with the first rounds being single elimination play-in matches. Two teams from Oceania, ORDER and Chiefs Esports Club, were meant to join the teams from NA. A huge mishap occurred, preventing either OCE team from making the tournament. That caused Riot Games to change the format and keep it an eight-team event.

On top of that, the list of teams does not include TSM. They are a staple of NA VALORANT since the very beginning, but won’t have a chance at Champions. That is due to Gambit Esports winning Masters Berlin. If an NA team won, they would have secured a spot at Champions and an LCQ spot would have opened up.

100 Thieves has to be the favorite to win this one. The North America First Strike winners have made their roster changes and are confident in the group they have headed into the LCQ. Since that major victory, it has been an up and down ride for the Thieves. Stage 3 of the VALORANT Champions Tour is where they kicked it into gear. They took 3rd place at Challengers 1 and 2nd place at Challengers Playoffs. That sent them to Masters Berlin where they were defeated by Team Envy for a 3rd-4th place finish. The sky is the limit and the goal for this team.

Version1 is another team that has seen some ups and downs. They entered VALORANT in February 2021 with a talented roster. It wasn’t long before they moved up from T2 tournaments and started wrecking shop in Riot hosted events. Stage 2 Challengers Finals saw them steal 2nd place and a berth at Masters Reykjavik. That Masters event saw them perform well, but still fall short. All of this was marred by travel issues and a suspension that required stand-in players. The team seems rejuvenated, though.

There was a short period where FaZe Clan seemed unstoppable. Stage 1 Challengers 3 and Masters saw FaZe introduce a rushed and chaotic style of gameplay that only Sentinels could overcome. They were the hottest team on the planet during that time. Stage 2, however, was a nightmare. They failed to qualify for any of the Challengers Main Events. Hoping to turn things around in Stage 3, FaZe took 2nd place at Challengers 2, but ultimately couldn’t secure a Masters spot in the Challengers Playoffs. At any time, this team can light it up. They just need to be on top of their game.

XSET was called an underdog team for a long time. They would pull off miraculous wins that nobody expected. Well, at some point, they went from being the underdog to the favorite. The entire VALORANT Champions Tour has been one big improvement for XSET. When it came to the Stage 3 Challengers Playoffs, they fell to the eventual Masters Berlin runners-up, Team Envy. There’s no shame in that. All signs point to them making it far in the LCQ.

Luminosity Gaming has been on the outside looking in for all of the VCT. The team looks nothing like it did at the start, but that doesn’t make them any less of a threat. If anything, the changes could set them up for success finally when it matters most. Opportunity after opportunity has fallen by the wayside for LG. Much of that could have just been bad luck. They managed to place 3rd at Stage 1 Challengers 1, Stage 1 Challengers 3, and Stage 3 Challengers 2. Greatness has been dangling in front of them. They just need to grab it.

No other team screams potential like Rise. A COVID scare with Ryan “Shanks” Ngo was proven to be a false alarm, so there is no uncertainty with this squad heading into the North America Last Chance Qualifier. They’ve worked hard and it shows. Lower tier tournaments were their bread and butter. They dominated those for months before finally pulling the trigger on the VCT. Raw talent and the hunger to win is what got them to this point. Rise will have to rely on that to go even further.

Cloud9 is one of the most popular esports organizations on the planet. They field the Cloud9 White VALORANT team who has decimated the competition in Game Changers. They also have the Cloud9 Blue VALORANT team that will participate in the LCQ. This is a team who has changed. A lot. The addition of Anthony “vanity” Malaspina might be the one change that will make a difference. Cloud9 Blue is a team that can make anyone sweat. If they are overlooked, they are going to run rampant in this thing.

The beginning days of VALORANT saw a Gen.G roster poised to be the best in the region. Several invitational tournaments went their way and huge victories over early iterations of Cloud9 and Team Envy (as together we are terrific) put them on the map. Now, like many other teams, their roster has shifted around and glory is a thing of the past. They haven’t been terrible, but they haven’t been incredible. They want more. Need more.

It would be easy to just say 100 Thieves run away with the LCQ. That’s no fun, though, so let’s dig a little deeper. 100T should take down Gen.G, but a possible match against XSET awaits them in the Upper Semifinals. If XSET can get through LG, XSET will win a close match against 100 Thieves and make it to the Upper Final.

In the bottom half of the bracket, Rise should have FaZe Clan’s number and V1 vs. C9 is a toss up. C9 feels like the right choice to make it to the Upper Final from those teams. Of course, XSET will defeat them and move to the Grand Final.

The Lower Bracket is anyone’s game if things go as predicted. 100 Thieves will more than likely roll through it. If not, expect Cloud9 Blue to take their spot. XSET against 100T/C9 will be the Grand Final. It is XSET’s time to shine.

Stay tuned to Run It Back as the Last Chance Qualifiers take place and determine the final teams headed to Champions!