MitchMan, Tombizz, and Zescht on EMEA teams at Masters Berlin 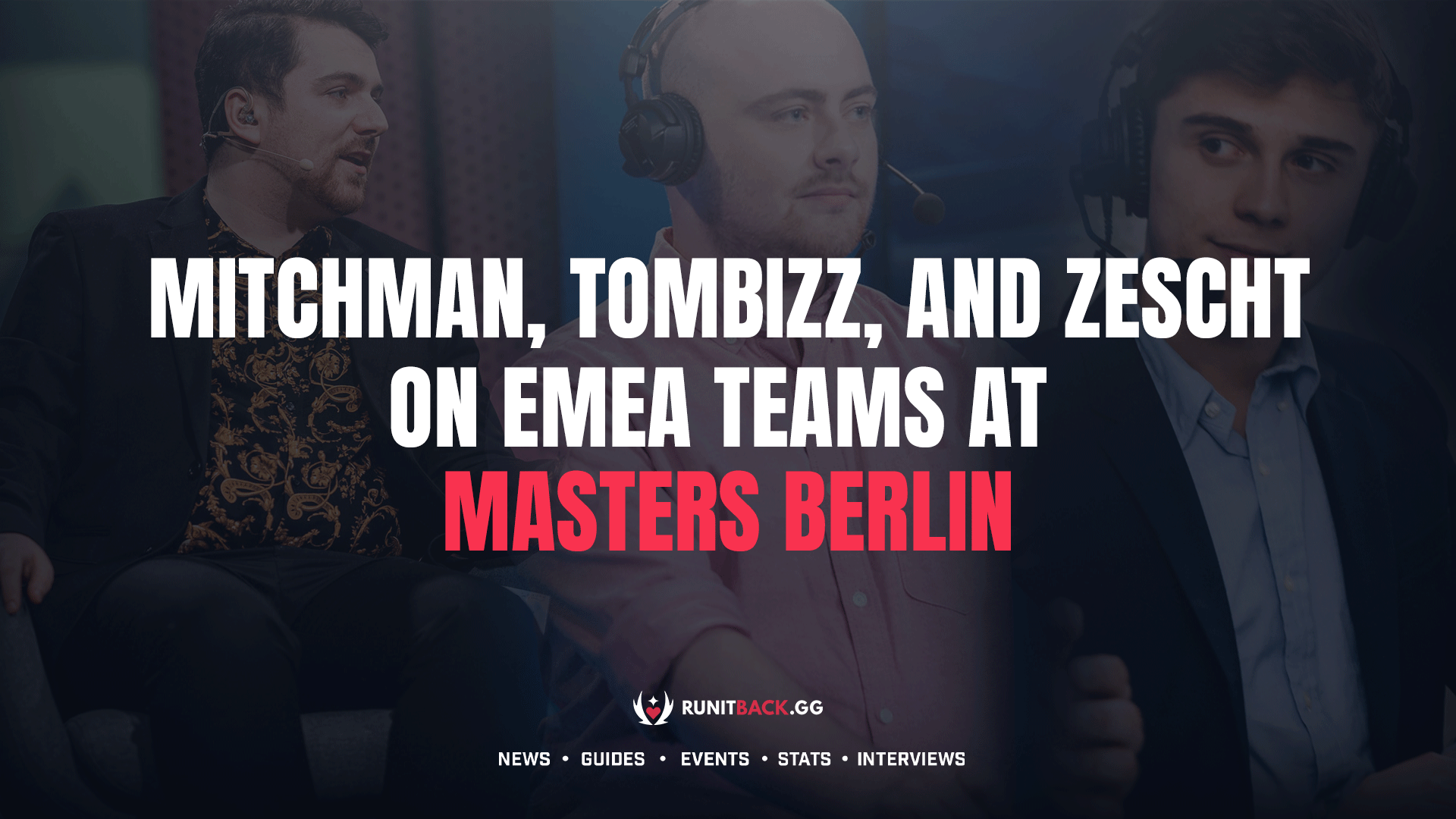 VALORANT Champions Tour: Masters Berlin is right around the corner. The second international LAN VALORANT event is set to boast a larger amount of teams than its predecessor, Reykjavik. The stakes, also the highest yet, as the winner of Berlin gets a straight pass to VALORANT Champions, which has been confirmed to also be held in Berlin, Germany at the beginning of December of this year.

We reached out to some of EU’s finest analysts and commentators and received their thoughts on how the European teams will fare at Masters Berlin. Tom “Tombizz” Bissmire, Mitch “MitchMan” McBride, and Vincent “Zescht” Talmon-Gros all shared their views and predictions ahead of the grand event in Germany.

How do you think Acend, Gambit, G2, and SuperMassive Blaze will fare at Masters Berlin? Any personal favorites?

Tombizz: I think looking at the previous event we have the best 4 teams we could hope for. SMB (SuperMassive Blaze) were still somewhat of a surprise considering how short the time they had to get ready was but thoroughly impressed at the last event. All 4 teams have both a mix of incredible individual skill and tactics in order to adapt well on the fly. I expect big things from both Acend and Gambit who I still put as the best of the bunch but with the extra time I hope to see the best version of G2 as well who had a few moments during EMEA I am sure they will want to forget.

Zescht: My eyes are all on Gambit somehow. I am sure I’m underestimating Acend right now, but Gambit is my No.1 from EMEA right now. Redgar and his boys are together for quite some time now. They’ve had so many tests of their mental strengths so far and I believe they went from CIS-staffage to a nearly unbreakable unit. One thing I worry about, it’s a LAN and there are a lot of players who got tons more experience than them.

MitchMan: For me Gambit are the favourites to win it all. Their strong defaults will easily crush NA’s play!

What qualities separate the teams from EMEA from the others at Masters Berlin?

Tombizz: I think the big thing is competition. EMEA has so much depth in talent that realistically we could have had a whole different set of squads representing us. If we had FPX, Guild, Liquid and Fnatic I don’t think anyone would be particularly surprised so now heading off to Berlin, sure, it’s going to be very tough still but it’s not like they haven’t already gone through some pretty incredible teams. I think this can be reflected somewhat in NA as well and Korea has some pretty strong teams that didn’t make it but looking at some other regions it seems they might get a nasty shock when they hit Berlin.

Other than that I love how the styles of squads are very different. Preparation for say Gambit and Acend are completely different beasts. One team with very passive default attacks and the other with a fierce burst style with very aggressive duellists and pop flash agents. It means you’re never going to get 2 games alike vs EMEA opposition coming into Berlin.

Zescht: Before we saw all the styles clash in Reykjavik, we always thought NA vs. EU is “Aim” vs. “Strats”. Fnatic did an excellent job against Sentinels, but we’ve seen in the long run that this Sentinels type of play seems to be slicing through those tactical units like a scalpel through skin. From a stylistic point of view, I’m just looking forward to Vision Strikers.

MitchMan: For me EMEA brings a more calculating play than some of the other regions. With Gambit for example it is very rare to see them give away advantages with bravado plays.

Which two teams are you looking most forward to seeing go up against each other?

Tombizz: Although I am sure its one of the more boring answers Sentinels vs Acend for me is a matchup and a half. Could decide who is the best Jett in the world, although I am sure a few other names such as Izzy, Yay and Heat could be thrown into the hat as well. Also, you look further down each roster and you still find superstar players. Yes, cNed vs TenZ will be a spectacle but SicK vs Zeek is also going to be crazy and you can pretty much make these comparisons all the way down the roster. On a side note, I hope we also get a Gambit vs Sentinels game. nAts vs dapr might be the rattiest game of VALORANT ever played and I am all for it.

MitchMan: I cannot wait to see Sentinels vs Gambit. Or even 100T vs Gambit. These will be SUPER exciting games.

Which players from EMEA do you think will have the highest impact throughout the event?

Tombizz: If Sheydos can hit the form he had in the last few games of EMEA once Gambit had qualified, he could end up being the difference maker for the CIS squad. You could make a highlight reel from him and him alone in those matches.

If G2 are to do some damage as well I will always look towards nukkye to be the difference maker. He has been one of the best players in EMEA for close to a year now and can never be missed off a list of players to watch.

From SMB Izzy feels like the obvious choice but I will actually go towards pAura. Insane individual skill, high impact lurks but also calling in a brand-new role for the squad. If he manages to juggle all of that and they place well in the tournament then he can’t be overlooked.

Again, a little off the obvious answer with cNed but starxo for me is Mr impact when it comes to Acend. The man is so good at setting up the rest of his team, earning such a high impact Ultimate and then has some of the highest clutch potential of any player from EMEA. Truly gets overlooked sometimes within that team and I think no player from the region has more impact.

Zescht: Not quite sure if there’ll be anyone who won’t say nAts. One of the most influential individuals within Gambit. Next on the list is cNed. Lothar once said that he was the one having a major impact on the way Jett shaped. Now he has like 10 more stats to it, but I fully agree with him on that.

Any predictions on who will take the MVP of the tournament?

Tombizz: I missed him out in the previous question purely to put him for my answer to this. I have been the number 1 nAts fanboy since looking into him in preparation for the 1st EMEA event and to see him succeed and qualify for Masters has made me very happy. I think this is just the beginning of what is going to be an incredible career for nAts and the way he performed in every game for Gambit has me in no doubt that he will be in contention for the MVP spot in Berlin. I can think of few players who can utilize abilities better than nAts and his fragging power and clutch ability is off the charts. The fact is teams have tried to stop him in many matches and failed and I can’t see anyone other than maybe Sentinels shutting him down.

MitchMan: MVP of the tournament I’ll call as nAts.

We thank Tombizz, MitchMan, and Zescht for devoting some time to giving us an insight into how they think things will go down in Berlin.