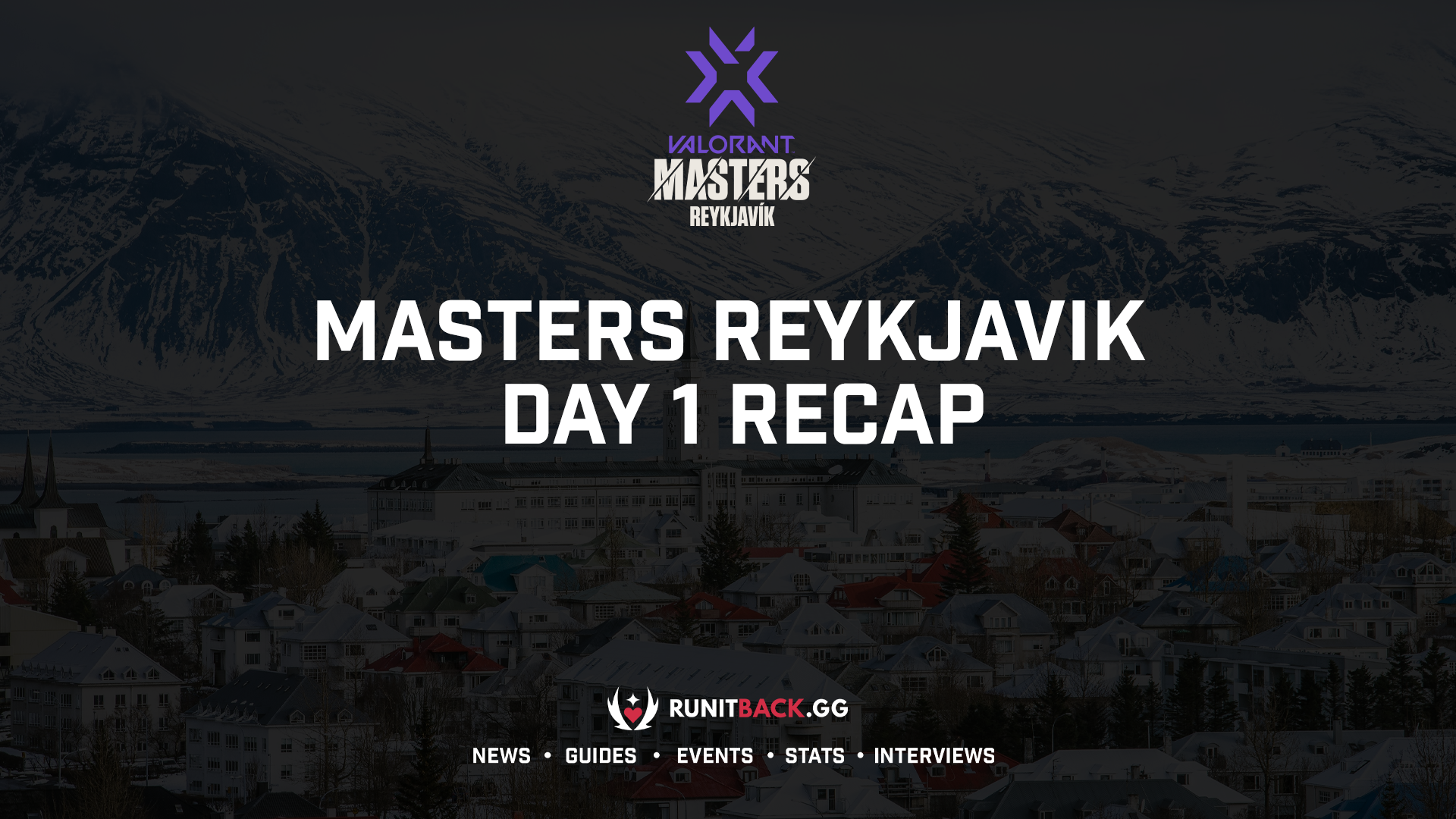 The Valorant world has been waiting for this moment and it finally arrived. The second Masters event of the Valorant Champions Tour has begun. Masters Reykjavik involves ten of the top teams from a variety of regions all competing for supremacy in the first international Valorant LAN tournament. Day 1 was an exciting experience for players and spectators alike.

The first day of competition in Iceland saw FNATIC take on KRÜ Esports, Version1 battle Crazy Raccoon, and Sharks Esports go toe to toe with NUTURN Gaming. EMEA, LATAM, NA, JP, BR, and KR all saw representation throughout this first day of Masters Reykjavik. It was a wonderful round of matches that has everyone more than hyped for the remainder of the week.

Run It Back is here with the Day 1 Recap, showcasing who was victorious in their first outing at Masters Reykjavik.

KRÜ Esports were a formidable foe for FNATIC during the pistol rounds on Haven. Every single pistol round of the first map went to the LATAM representatives. The gun rounds were where FNATIC shined. There were many rounds where KRÜ Esports were primed to win. Unfortunately, those turned into missed opportunities. A big game by Nikita “Derke” Sirmitev led FNATIC to a 13:5 Haven win.

The start of Icebox was a similar story. KRÜ Esports quickly dominated the first pistol rounds. FNATIC wasted no time in turning things around, however. The team from EMEA attacked with aggression and took advantage of the missteps by their opponents. A massive 4K by Derke saw his domination continue and the hopes of KRÜ Esports destroyed. The series was over with a quick Icebox showing. It ended 13:4 for FNATIC.

Version1 dominated the opening rounds of Ascent. Crazy Raccoon managed to take the third round of the map, but Version1 easily pulled ahead behind the crazy Jett plays of Erik “penny” Penny. A 4K Clutch by Byeon “Munchkin” Sang-beom switched the momentum to Crazy Raccoon. They fought back to keep it close at the half. The second half saw CR pull ahead after some solid rounds and a Flawless. Version1 was not finished, though. Penny continued popping off along with Jordan “Zellsis” Montemurro as they took V1’s lead back. The first close map of the tournament went in favor of the NA squad 13:11.

Icebox began with another great showing by Version1. They were ahead 2:1 prior to a lengthy technical pause. That did not slow their momentum. A Clutch by Loic “effys” Sauvageau kept V1 rolling. The entire team asserted their dominance against Crazy Raccoon. The team from Japan had a very tough time getting anything going in the first half. CR took a handful of rounds in the second, but effys kept proving how clutch of a player he is. V1 shut down CR 13:10 to take Icebox and the series.

Brazil versus Korea rounded out the first day of Masters Reykjavik. It started on Haven. NUTURN immediately played the aggressor on defense, but Sharks were able to turn things around for the first two pistols. With weapons in hand, NUTURN Gaming took their first round shortly after. Gabriel “gaabxx” Carli lit up NUTURN as Sage, keeping Sharks ahead. They absolutely stomped NUTURN through the first half. That kept up in the second half. NUTURN was outplayed in every way by Sharks. Haven ended with a surprising 13:5.

The second map saw the teams battle it out on Bind. Sharks Esports kept the pressure on NUTURN from the first map. Jung “peri” Bum-gi pulled it together with a 4K, making sure Sharks didn’t take both pistol rounds. That was followed by a Flawless NUTURN round. Seo “Suggest” Jae-young finally picked up the pace for NUTURN as they started to take control on Bind. The entirety of NUTURN had a fire lit under them leading into halftime. Sharks bit back just a bit, but NUTURN kept things in their favor. Bind went to the Korean team 13:5.

The final map of the day was also the first map three of the day. Sharks and NUTURN took things to Ascent to determine the victor. NUTURN started with a wild Flawless push as the defending team. Kang “solo” Keun-chul snagged a 4K as NUTURN stomped their way to four rounds, giving up only one kill to Sharks at that point. Kim “Lakia” Jong-min started to decimate Sharks with the Odin and it looked all but lost. An Ace by gaabxx started the second half, but the deficit was too much to overcome. NUTURN defeated Sharks Esports 13:5 to close out the series on Day 1 of Masters Reykjavik.

Stay tuned to Run It Back for more coverage as Masters Reykjavik continues!