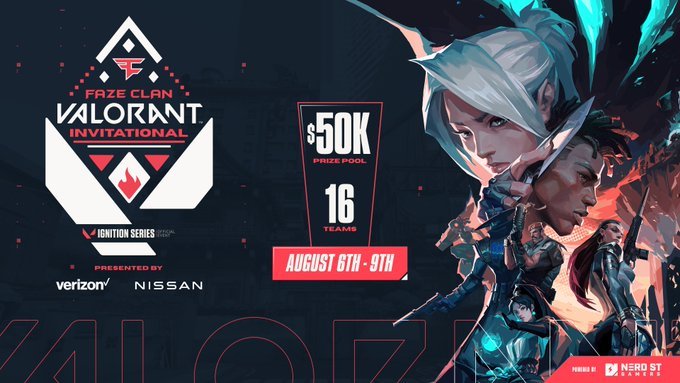 The FaZe Invitational is set to begin on August 6th and is one of the Riot Ignition Series events, featuring a $50,000 prize pool.

Sixteen teams will be participating in this event, four of which had to play their way through an open qualifier, while the remaining twelve received direct invites. The twelve invited teams are listed below:

The four teams that made it through the qualifiers:

The FaZe Invitational format will consist of GSL group stages, with four groups. Two teams from each group will continue through to the playoff bracket. These eight teams will play their way through a double-elimination playoff bracket. All the matches throughout the event, except the grand-finals, will be best-of-three (BO3), while the grand-finals will be a best-of-five (BO5).

More information on the groups can be found on the image below:

FaZe Invitational – What to Expect

The most prominent story-line going into this event is the emerging rivalry between Sentinels and TSM. With players taking to social media and disputing the number one position in NA, both of these teams will be eager to win this event. Each of these teams has had their fair share of tournament victories, although Sentinels have had the more recent success, winning the last two events they participated in.

Some other notable teams to look out for include; Cloud9, Gen.G, and 100 Thieves, as they have all proven themselves to be capable of taking maps against any opponent.

All the matches will be streamed on www.twitch.tv/faze, with the first match starting at 14:00 Pacific Time.

For the latest competitive news in the world of Valorant, follow us at Run It Back.