FaZe Clan’s corey is ready for a rematch against Sentinels 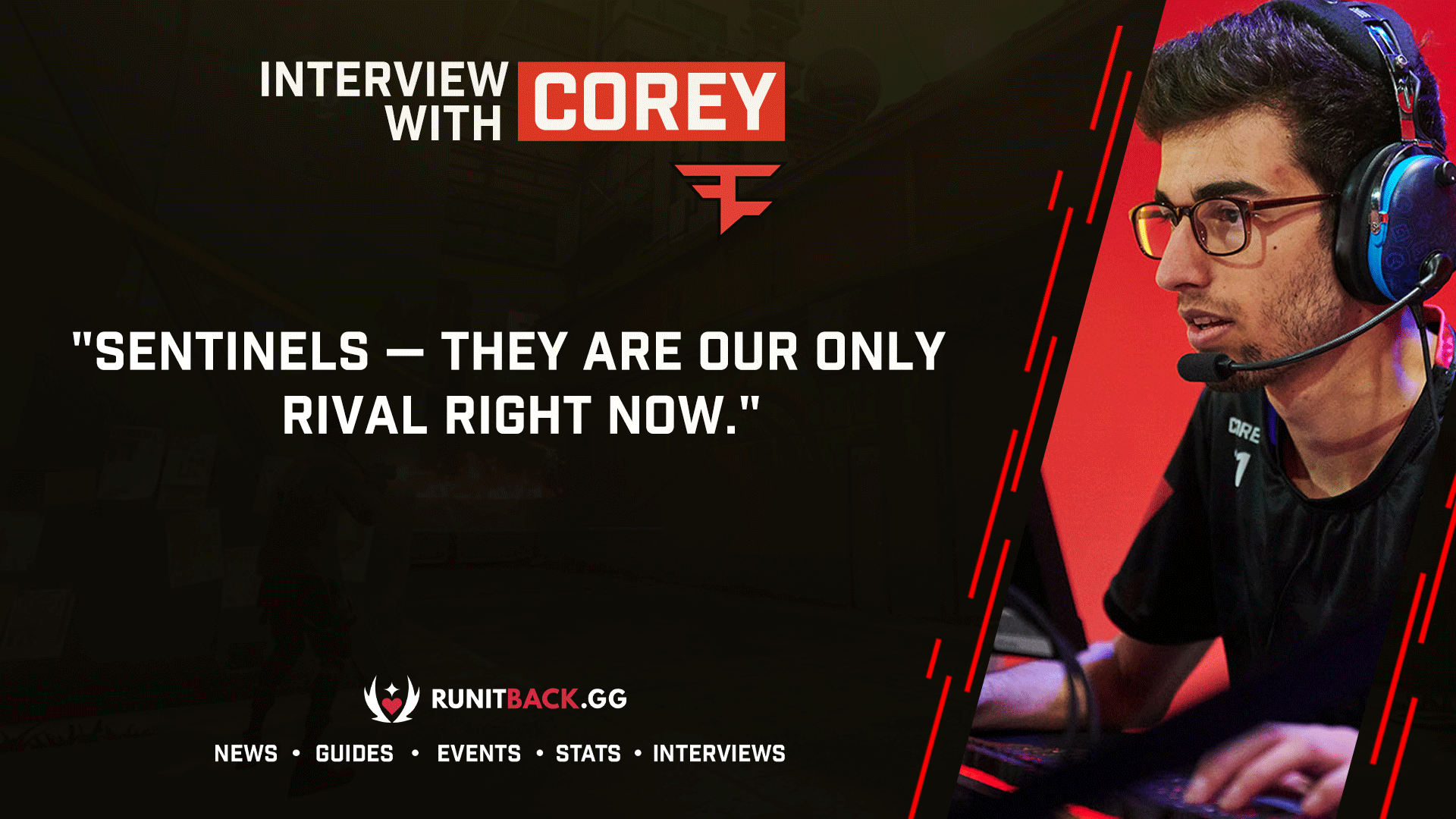 The first day of the VCT NA Stage 1 Masters event is in the books. An incredible showing by FaZe Clan overwhelmed and completely stunned XSET. Following the contest, Run It Back was given the opportunity to speak with Corey “corey” Nigra. He was very confident and let it be known that the team was also feeling that way as a whole. Thank you to corey for the interview and good luck in the rest of the tournament.

FaZe Clan’s corey is ready for a rematch against Sentinels

Run It Back: After losing to XSET the last time around in Challengers 2, was revenge on the mind at all?

corey: We didn’t think much of it. We knew we were going to beat them.

Run It Back: Easy at that! Getting into the action. With a teammate popping off like babybay did on Haven, how does that affect the way the rest of the team plays?

corey: It definitely helps when a teammate is popping off. It is kind of normal for Andrej (babybay) to pop off, especially with how we are playing as a team. As long as we’re winning rounds and it feels good. You know, we’re working the map really well. We’re getting our kills when we need to. Our retakes are looking clean. It doesn’t matter if Andrej has 30 kills or five kills, we’ll be happy no matter what.

Run It Back: Bind saw a much more even performance by the team. Everyone got their chance to shine. What was your favorite play from the map of your own and of a teammate that you can recall?

corey: I’m not going to lie. I think we were just winning our duels at that point. No matter where they went, they were met with a brick wall from one of our players. We were just able to win our duels, you know, get two and die. That makes our retakes really easy. Our positioning was really good, too. A specific play, though?

On our attack pistol round, we did a really good job of pushing B Elbow when we had the bomb down. We had really good positions for that afterwards. Bomb is down, we had a crossfire from Hookah, and they were trading out in Elbow. We were up players at that point and Jimmy (Marved) wrapped around CT. The last two players had no chance to win.

Run It Back: Honestly, FaZe Clan often came off as a super talented team who just couldn’t get the job done for a while. That clearly isn’t the case anymore. What do you have to say to those who stuck by you guys from the beginning?

corey: We appreciate everyone who has been supporting us from the beginning. We definitely know who you are. We see your supporting us. Even during our down time as a team. We can’t thank you enough for helping us.

Run It Back: The team is on a streak, beating T1, NRG, Luminosity, 100 Thieves, and now XSET. Is there anyone who can stop this FaZe Clan squad?

corey: Sentinels — they are our only rival right now.

Run It Back: Obviously, they are one of the better teams and arguably the best team in North America. Is that the goal? To get a win against them in order to cement your place at the top?

corey: Every time we play them, it is a blood bath. Back and forth. They also come out on top and squeeze through. We played them in the JBL (JBL Quantum Cup) and it was overtime on Haven. Like, hella overtime on Haven. They snuck out with the win there. Split was very close as well at 13:9. Each round was so close.