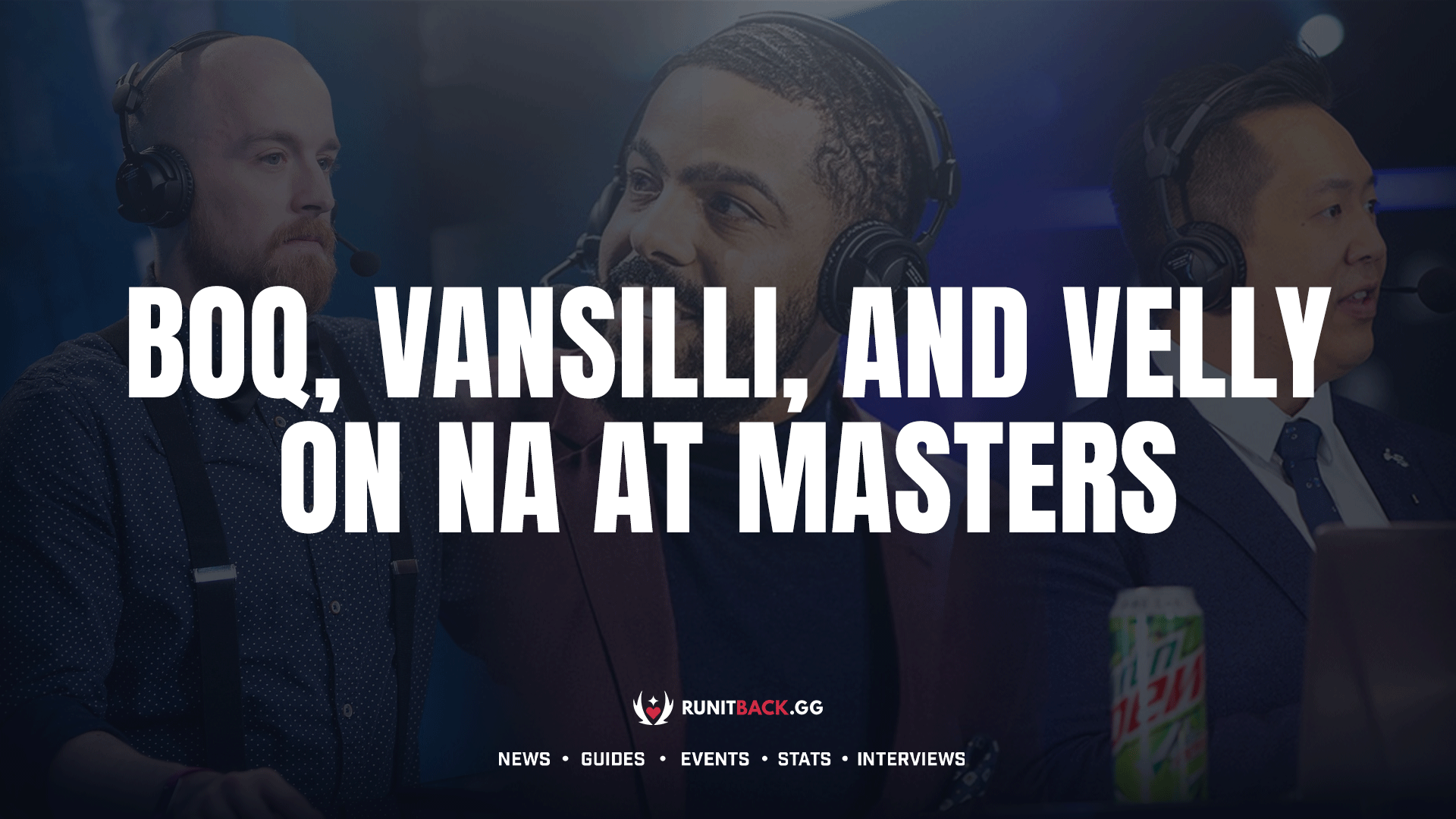 The second international VALORANT LAN is approaching. Masters Berlin is taking the VALORANT Champions Tour to new heights with more teams from a variety of regions to determine who is the best in the world. Right now, that title belongs to Sentinels from NA. Run It Back reached out to a few names from the NA VALORANT scene known for their casting, hosting, and outstanding analysis. Mark “Boq” Wilson, Alex “Vansilli” Nguyen, and Loviel “Velly” Cardwell all gave their thoughts on how NA will perform at Masters Berlin, in the group stages and as a whole.

Boq: Sentinels are the best team in the world and that isn’t changing any time soon. Prior to the change in format I would have said that Sentinels would qualify for playoffs without dropping a map. However, following the change in format due to Bren Esports, visa issues, I still think that Sentinels make it out of groups without dropping a map. They are the number one team for a reason and they will showcase that in Berlin.

Vansilli: Sentinels continue to be an unstoppable force and it doesn’t look like anyone is cooling down in terms of individual performance on this team. Having mastered the mechanics of the game, it just comes down to strategy and ShahZaM continues to put his team toward the path of success. Playing to their own game, aggressive, quick on trades and understanding the patterns of their opponents, to adapting on the fly have been the keys to their success and I believe they will be able to win Berlin.

Velly: As I started to write this paragraph about Sentinels and how I think they’ll do, I laughed. Let’s be completely honest with ourselves, this is the complete team. I think the beauty about this roster is that even though TenZ is known as the best player in the world, they don’t rely on him as a crutch for victories. I think the real genius of this roster is that ShahZaM has done a phenomenal job at bringing the best out of every player. Whether it’s dapr with his extremely annoying Viper setups or SicK, the versatile mastermind that you can see wreaking havoc with any agent out there, it’s easy to see why this team is the best. I think that this roster has barely shown us their playbook and I hope that they get tested in Berlin so we can see what their peak performance really looks like.

Boq: While the switch to LAN might be welcomed by the veterans on 100 Thieves’ roster, Asuna has only played on LAN one other time at Fragadelphia 14 for CS:GO. I’m curious how the young fragger handles the pressures of a stage environment against the world’s best. They will make it out of groups but the matchup against Gambit will likely go the distance and key rounds could result in a 2-1 loss and 100 Thieves leaving groups as the #2 seed.

Vansilli: 100 Thieves will be able to exceed expectations coming into Berlin. They have a star duelist in Asuna who can go toe-to-toe with any other top duelist in the world, but most importantly, we are seeing Ethan getting more and more comfortable in the Skye role since the buff that she’s gotten. With the supporting cast that these two fraggers have surrounding them, I’d expect 100 Thieves to finish 3rd, at the least, in Berlin.

Velly: 100 Thieves are probably man for man, the scariest roster in NA. At least in my eyes. I feel like with the addition of Ethan, this roster hit a new level individually. When they play, it’s just lovely. I think that steel elevates this team to another level and you can see it with their playstyle. They love to counter teams at a slow pace and take over when they see fit. But their secret weapon? There’s nothing better than when you see Asuna let off the leash like a pitbull because he makes magic happen. He is by far one of the top duelists in the world and he reminds us of that reason every time he’s on screen.

Boq: A reinvigorated Envy stormed into Challenger Playoffs placing 3rd, finally getting over the 4th place hurdle that’s plagued them to qualify for Berlin. The addition of “El Diablo” and Marved to the roster clearly had an effect, as they took 100 Thieves to a fifth map in the Lower Final on just six days of practice. This roster has an incredibly high ceiling and things will only have improved since that match, as the team has had more time to work together. Envy will come out of groups 2-0, without dropping a map.

Vansilli: Envy has finally figured it all out. Every single one of the players fit in their role perfectly. They have a great official/unofficial coach in MikesHD_ and every one of them is fragging out. I am very confident to say that Envy may have become the 2nd best team in North America with the latest additions in yay and Marved. They made Sentinels sweat during the NA Regional Finals with only six days of practice. I can’t imagine how scary they will be in three months. Envy should get 2nd place in Berlin.

Velly: Envy is the team that stole NA’s heart, even with them falling short when it mattered most. This time around? I believe things will be different. Their playstyle with this new roster brings much more versatility to their path for success. I knew Envy as a textbook team that played the game in an incredibly smart and safe way. No risky OPing, no one man army, etcetera. With the addition of yay and Marved, whew. This team is nasty! They have star players in every position to test a team’s weak point and, boy, does it work. With yay being their spearhead as Jett, you can expect him to open doors for players like crashies to finish the round. Hats off to FNS for putting together such a dangerous roster. I truly believe that Envy will make not just NA proud, but the rest of the world with their incredible gameplay.

Run It Back would like to thank Boq, Vansilli, and Velly for their thoughts and contributions. Stay tuned as the VALORANT Champions Tour continues for more coverage, including features, recaps, and interviews!