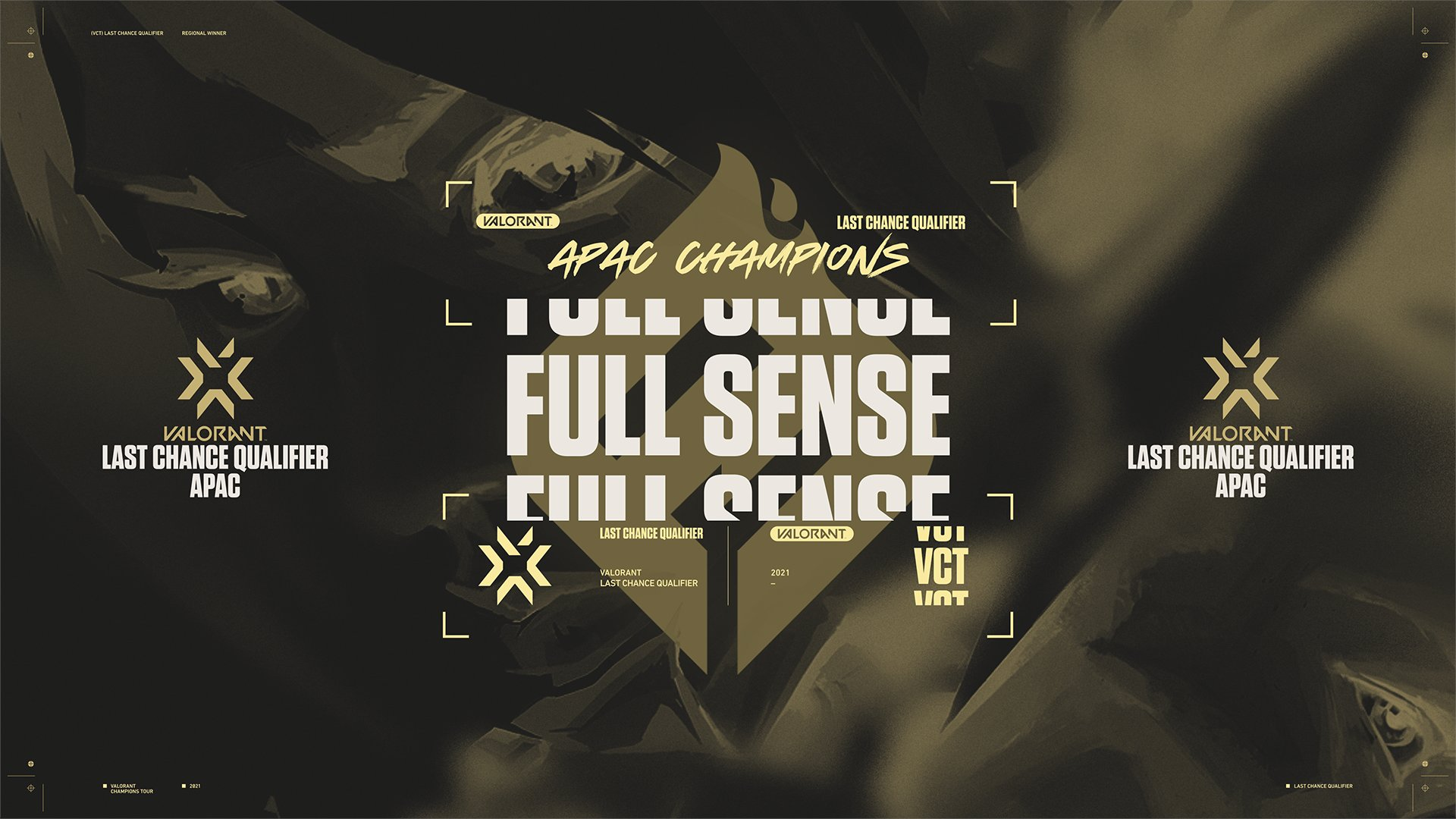 It’s been an intense week with VALORANT teams all over Asia battling out for the last VCT CHAMPIONS slot for the region. In the end, only one team was left standing. FULL SENSE are your APAC LCQ Grand Champions! Their victory came after a grueling best of five (Bo5) series against Japanese team Northeption that went the full nine yards with five games in total. FULL SENSE will be joining their other SEA brethren, X10 and Team Secret, for the final major VALORANT Tournament of the the VCT circuit. Alongside the SEA teams are Vision Strikers from Korea and Crazy Raccoon from Japan to round out the representatives of APAC.

If you missed out on the first few days of the VALORANT APAC LCQ then check out our recaps!

And so without further ado, let’s just jump right into it:

If there’s any indication how competitive this VALORANT series would be, the first map is a good one. In the first half, both teams traded rounds back and forth. Whether it was an eco or a full buy round, there was always a lingering sensation that either side could still take it. Both Seoldam and Chanawin “JohnOlsen” Nakchain took to the skies with Jett and the battle for supremacy on the agent was intense.

When one would make a play…

By the time the second-half rolled around, however, it was FULL SENSE that had the advantage with a two-round lead. Then Northeption pulled it back with a ferocious offensive half that the Thai squad simply couldn’t block. While of course Seoldam was still the star of the team and top fragged, Northeption weren’t winning rounds by hero plays. The Japanese team simply outmaneuvered their opponents again and again. Kititkawin “PTC” Rattanasukol unfortunately couldn’t find much impact like he did in FULL SENSE’s series against DAMWON Kia.

Eventually Northeption would end the half in a pretty convincing manner. The last time the two had faced off in the Upper Bracket Final, it was FULL SENSE that won out on the map. This time Northeption would flip the script ensuring that they would be going into the next map on a very positive note.

In the next map, FULL SENSE turned things around. They stormed through the first half of the map and overwhelmed Northeption’s defenses. While JohnOlsen continued right where he left off on Ascent, things didn’t go too well for his Jett counterpart. While Seoldam faltered, it was Tenta “ten” Asai that picked up the slack. The player had been performing all tournament long and now he had the herculean task of getting his team over the line. He was almost able to do it too.

FULL SENSE absolutely outplayed Northeption in the first half as a team. Then they faltered on the other side even after winning the second pistol and converting. The Thai team only needed one more round win to close out the map, but then their opponents won a jaw dropping nine rounds in a row to almost bring the game to overtime. Unfortunately for the Japanese Squad, they tripped at the last step despite getting the opening kill. Chanitpak “ChAlalala” Suwanaprateep ended the game with a stunning 3k and equalized the series 1-1.

Northeption pulled a new trick up their sleeve on this map by playing a double controller setup. FULL SENSE went for a change with their composition as well having lost the map the last time they played it against Northeption.

Bind ended up being the most back-and-forth map of the series with no team getting a real strong advantage until Northeption closed it out in the end. Thirty-four rounds were played in total. More rounds were played in this map than in any other series in the entire tournament. When Northeption would win a few rounds, FULL SENSE would bring it back. Ten continued right where he left off and fragged out on Raze. Moon “Astell” Ji-won was right behind him on Viper.

On the other hand, PTC more than made up for his performance in the last map. Last time, his Breach felt rather underwhelming. This time, his Raze was a force to be reckoned with.

With the map going into quintuple overtime, the game didn’t just become a battle of wits or aim. The game became a battle of endurance. Who could last without faltering the longest? The pressure was on for both sides and each would barely win out against the other only to be brought back to a tied score again and again. In the end, it was Northeption that won. The battle was hard-fought, but they managed. Now they would only need one more map to close out the series.

However, despite the stinging loss, FULL SENSE weren’t done just yet.

On Ascent, it felt like Northeption had control over the game, more or less. On Split, FULL SENSE were the ones in control. This time they didn’t give away too many rounds like in Icebox either. Again, the first half looked fairly competitive between the two. The Thai squad took the lead with a 7:5 score line. Northeption just couldn’t seem to equalize things after that. After all, how can you when your opponent is hitting shots like this on an eco?

FULL SENSE had Northeption’s number on this one. JohnOlsen continued to frag out with his signature Jett, but the way the SEA reps worked as a team definitely shows that squad has a lot of depth. The fact that they were able to recover from a mentally taxing defeat in the third map showed impressive resolve as well.

With the score all tied up, things came to a head in the fifth and final map. Last time they faced off, Northeption won the map with a 13:7 score line. FULL SENSE came into the map strong and this time they were the ones that flipped the script on its head. Northeption definitely tried, but it felt like by this point the team had simply run out of steam with regards to both their fragging ability and strategy.

It didn’t start out that way. In fact the Japanese squad were the ones that pulled ahead in the first half. Unfortunately, the second half ended up being a complete shutdown with Northeption only coming away with a single round win.

In the end, the teamplay from FULL SENSE was too much and it was the Thai squad that would take the map and the series and the entire tournament.

Props to Northeption for their incredible run, but when it comes down to it, FULL SENSE were just the better team in the end. It’s been an incredible journey for them and now they will be the ones representing SEA in the final VALORANT tournament of the year.

The APAC LCQ was one of the most competitive events this year. There were intense moments, astounding plays, and unforgettable results. Hopefully there will be more events like this in the future of VALORANT. Things look like it can only get better from here.